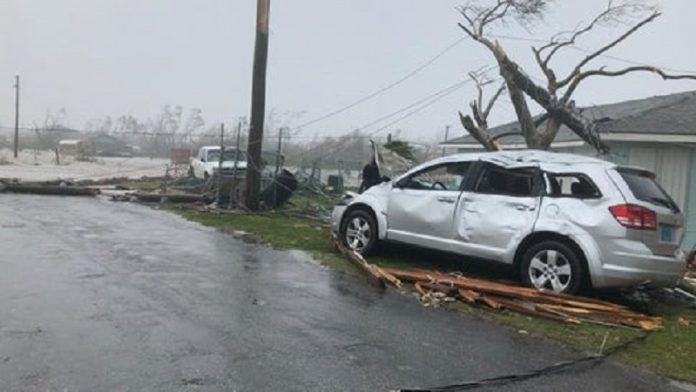 An almost stationary Hurricane Dorian continue to have devastating impacts on Grand Bahamas as it inches its away from the Bahamas on Monday.

The Category 5 storm, packing sustained winds of 165 miles per hour (mph) was now 40 miles east of Freeport, Grand Bahamas and weather officials warned residents to remain away from coastal areas as sea swells could also cause damage and death.

“Dorian has not moved…which is not good,” said Mike Stubbs of the Bahamas Meteorology Office.

He told television viewers that while the storm is expected to continue causing damage in the areas where it has made landfall, “flooding is the order of the day” for other areas.

There has been unconfirmed report of at least one death, a nine-year-old reported to have drowned- but there have been no official confirmation of that report.

The Miami-based National Hurricane Centre (NHC) said that Dorian, is moving west at one mph and a slow westward to west-northwestward motion is forecast during the next day or so, followed by a gradual turn toward the northwest and north today and tonight. The hurricane will move dangerously close to the Florida east coast tonight through Wednesday evening,” NHC said.

“Dorian is a category 5 hurricane …and although gradual weakening is forecast, Dorian is expected to remain a powerful hurricane during the next couple of days,” it warned.

Videos posted on social media showed the damaging effect of the storm as house were without roofs, cars overturned and wide spread flooding as trees and branches bend to the force of the winds.

“Why isn’t it moving. I don’t get it. Some force controlling the hurricane,” one person wrote on Facebook, while another said”its absolutely not normal”.

The NHC warned that a brief tornado is possible this afternoon into tonight along the immediate coast of east-central Florida.