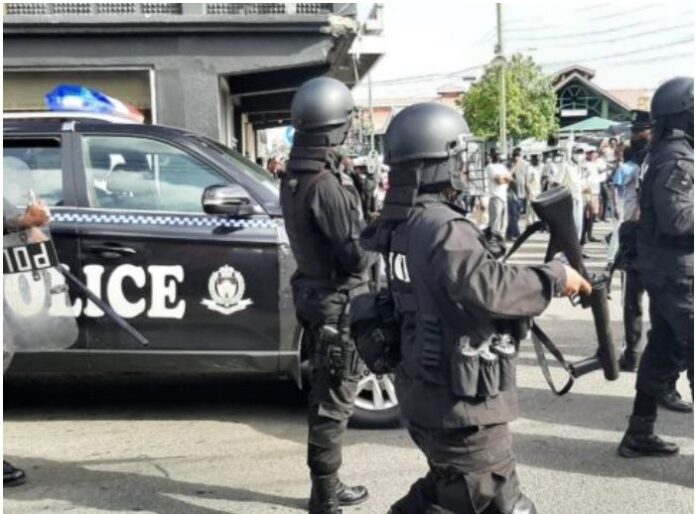 Persons who participated in a protest march last weekend against the government plans to have front line workers vaccinated against the coronavirus (COVID019) pandemic, are being urged to get themselves tested after a number of police officers who were present at the event have tested positive for the virus.

“The Ministry of Health will be calling upon, and I take the first opportunity to do so, to indicate to all those persons who were in attendance at that event that they should seek to as early as possible get a test to verify their status because the indications are that there might have been a spread at that A statement issued following the weekly Cabinet meeting, noted that government had been informed that “several police officers who were present on Market Street on Sunday afternoon,  August 8, controlling an unlawful gathering of anti-vaxxers, have tested positive.

Those who took part in the gathering, even as spectators, are encouraged to have themselves tested for Covid-19, so that they may not spread the disease to their loved-ones, their co-workers, and the folks they might encounter on buses, in shops, and other public and private spaces. Young children are among the vulnerable,” the statement noted.

Nicholas, speaking at a news conference, said  the investigation is continuing and that “all evidence points to that they (police and others) were all in attendance at the event where they would have been presumably exposed to some type of spread in that particular environment”.

Media reports here said that as many as 16 law enforcement officials have tested positive for the virus and the public relations officer of the Royal Police Force of Antigua and Barbuda, Inspector Frankie Thomas, said while the situation would have an impact on law enforcement,  the police will still be able to carry out their duties.

“Quite naturally, if an officer has to be taken off active duty due to health issues or any other unforeseen circumstances, it will have some impact on our human resources. However, as a professional and responsible organisation, we are always prepared and have a contingency plan to address these issues,” Thomas said.

But while the authorities are urging people to get tested, some of the protestors say they could be detained on presenting themselves for participating in the event that the Police Commissioner Atlee  Rodney and Prime Minister Gaston Browne had declared illegal.

But Thomas said that would not b be the priority of the police.

The authorities said that persons could be tested at the Sir Lester Bird Medical Centre free of charge.

Meanwhile, the government has said that only fully vaccinated persons will be allowed entry to the Stadium and the Public Cemetery for the state funeral of Sir Lester Bird, scheduled for August 26.

“All protocols established will be then engaged — the three to six feet social distancing rule, the proper wearing of face masks, and the sanitizing of hands with frequency,” the Cabinet statement said, adding that it had also accepted recommendations made by the Acting Chief Medical Officer, Dr. Terri-Ann Joseph, contact-tracing is to be intensified so that those who are unknowingly infected can be identified quickly and isolated, in order to prevent further spread of the virus.

“All meetings and gatherings are limited to 10 persons, except for churches, the public market, restaurants. Those who do not have to go out are encouraged to stay at home. Everyone is encouraged to go to work and to stop any chain of infection at work by obeying the protocols which require the wearing of face masks indoors, sanitizing hands frequently, and not gathering in clusters.

“All beaches are to remain closed on August 26, the National Holiday declared for the burial of Sir Lester Bird, from 5:00 am to 7:00 pm on that Thursday,” it added.