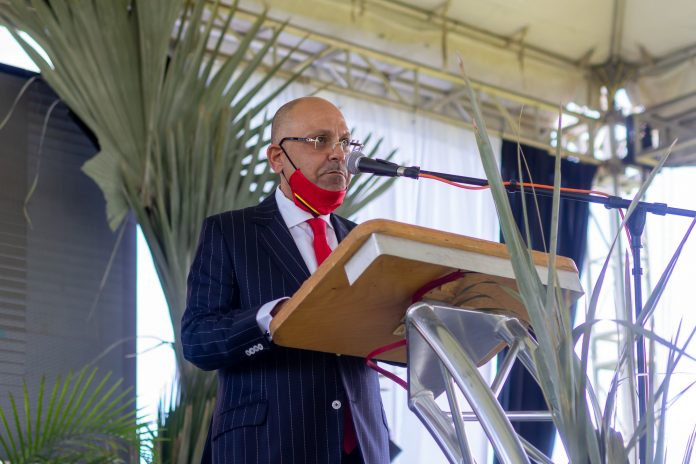 Government legislator Asot Michael on Wednesday welcomed the ruling by a High Court granting him an injunction against the ruling Antigua and Barbuda Labour Party (ABLP), that is seeking to take disciplinary action against him.

“I am very very happy that the judge ruled in our favour to grant the restriction. No further action can be taken by the Antigua and Barbuda Labour Party in terms of proceeding to set up the tribunal, which is really and clearly illegal and unconstitutional and not set up properly according to the constitution of the Antigua and Barbuda Labour Party,” Michel told reporters as he emerged from the High Court building.

The ABLP has been seeking to punish Michael for violating the party’s Code of Ethics, but the High Court ruled that there was no basis to challenge the validity of the tribunal’s action, citing that the application did not qualify as a public matter.

As a result, Michael’s attorney, Hugh Marshall Jr. will now have to submit a private claim to support the case of his client

In his arguments before the High Court, Marshall Jr., contended that the tribunal had no legal standing and is therefore incapable of deliberating the issues related to his client before or handing down a decision.

“We always knew that there were two schools of thought whether the application fell in the ambit of public law or private law and there were arguments put forward by my lawyer that the law has evolved in the Caribbean that political parties and members of political parties also hold public offices so that you cant bring application for a private entity, which is not a public body like the Antigua and Barbuda Labour Party which we sought to do”.

Michael said further that his attorney has made an application for leave for judicial review and “I think the judge went more with the conservative view in England that there are private clubs.”

The application was made against the ABLP chairperson, Mary Claire Hurst and a date for the case management conference will be given after Michael’s team files the appropriate claim within seven days.

A written copy of the judgement will be made available later on Wednesday.

In addition, he also argued that the actions of the ruling party breached his constitutional rights. He also sought compensation, which the court did not grant.

Earlier this year, a war of words broke out between Prime Minister Gaston Browne and Michael with Browne saying that he was distancing himself “from the behaviour” of the legislator.

In September, both men took to the airwaves almost simultaneously to put forward their position with Browne saying “as the leader of the Antigua and Barbuda Labour Party (ABLP) I completely distance myself from his behaviour and I want to remind him publicly that that type of rotten behaviour is unacceptable and he is not beyond the constitution of the Antigua and Barbuda Labour Party”.

Browne has promised that Michael, who was re-elected to Parliament on an ABLP ticket in the 2018 general election, “will be subjected to disciplinary action at some point.”

But Michael told radio listeners that he was born in the “bowels” of the ruling party, long before Prime Minister Browne became associated with the party.

He said that Prime Minister Browne, whom he had played a pivotal role in getting the leadership of the party, and ultimately the position of the prime minister “is ungrateful.”

“Don’t try to push me out of the institution I was born into,” Michael said on Observer Radio.