Prime Minister Gaston Browne has said he will appoint St. Peter candidate Asot Michael as a minister in his cabinet if his three and a half-year-old government retains power.

Browne was at the time speaking on the issue of corruption when he accused several former UPP ministers of being engaged in the sale of diplomatic passports.

“And now they want to come and point fingers at my government,” the ABLP leader said.

He told supporters at his party’s first campaign stop in Point that “notwithstanding all of the allegations, no corruption has been proven in my government.” 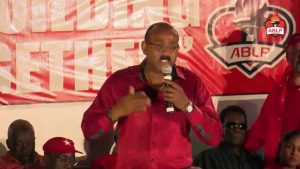 “I know that there are some allegations of bribery but tell them to prove it,” Browne said adding, “my policy is if there is any such corruption in my government, I will weed out whomever.”

Turning to the former Tourism Minister Asot Michael, who was arrested in London last year, Browne said, “But it’s an allegation, we haven’t seen any evidence.”

The ABLP leader said while he asked Michael “to sit out for the time being…if they dont present any evidence, then certainly I’m putting him back on the government.”