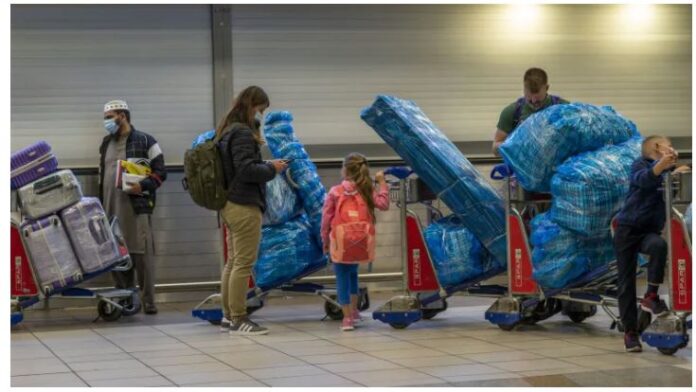 Starting today, all foreign nationals who have travelled through South Africa, Namibia, Zimbabwe, Botswana, Lesotho, Eswatini or Mozambique in the last 14 days will be barred from entering Canada.

Global Affairs Canada will also issue an advisory today warning against all travel to the region for the foreseeable future, Duclos said.

Canadian citizens and permanent residents will be allowed to return home — but they’ll face a new requirement that could make travel awkward.

Because there are no direct flights between the region and Canada, most travellers transit through airports in Europe, the Middle East and the U.S.

Starting today, travellers must get a molecular test in the country they connect through on their way to Canada.

Then, after landing in Canada, inbound travellers must also get an arrival test and wait for the results of that test at a designated hotel. If the test is negative, those returning travellers would be released to quarantine for a mandatory 14 days at home. They also would be required to go through a so-called “day eight” test on the eighth day of quarantine.

And anyone who has arrived in Canada from southern Africa in the last 14 days must immediately get a COVID-19 test — even if they are asymptomatic. They’re required to go home and quarantine while they wait for those results.

As nations close their airspace to flights from southern Africa, it may become more difficult to travellers leaving the region to transit through other countries.

Asked if the government would help those who may become stranded, Transport Minister Omar Alghabra said Canadians have been warned about the risk of travelling during a global pandemic for nearly two years.

Dr. Theresa Tam, Canada’s chief public health officer, said the new strain — dubbed the “omicron” variant by the World Health Organization (WHO) — has not yet been reported in Canada.

She said the omicron variant is notable because it has a large number of mutations, which may affect its transmissibility and the effect of COVID-19 vaccines.

“We’re concerned about this new variant and closely monitoring the evolving situation,” Tam told a briefing with reporters. “The challenges persist with this virus.”

Tam said the new travel requirements are a prudent effort to keep the variant out, but it’s likely cases of the omicron variant will emerge in Canada in the coming days.

“It is very difficult to keep a virus like this out entirely,” she said.

Tam said vaccines are “still fundamentally the most important layer of protection” and unvaccinated Canadians should get their shots. Research is underway now to determine the efficacy of the current batch of vaccines against omicron, she said.

It’s not unusual for a virus to mutate over time. The WHO brands a particular strain a variant of concern (VOC) when that mutation might affect factors like transmissibility, virulence or the effectiveness of vaccines.