In a condolence message, Maurice Merchant said Anthony was a Fifth Year Spanish student at the University of Havana who died on Sunday 28th January. He was 24 years old.

Merchant said Dane, who was from the village of Bendals, “was a diligent, friendly student who earned the respect of all in the Scholarship Division in the Office of the Prime Minister, the Embassy’s staff in Cuba, teachers at the University of Havana and his peers.”

“His sudden passing saddens everyone who knows him and his presence will be deeply missed,” Merchant added.

The Embassy of Antigua and Barbuda in the Republic of Cuba (132 Miramar Trade Center, Santa Clara, 3rd and 80th Streets, Havana) has opened a book of condolences until 9th February 2018. 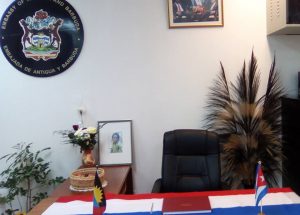