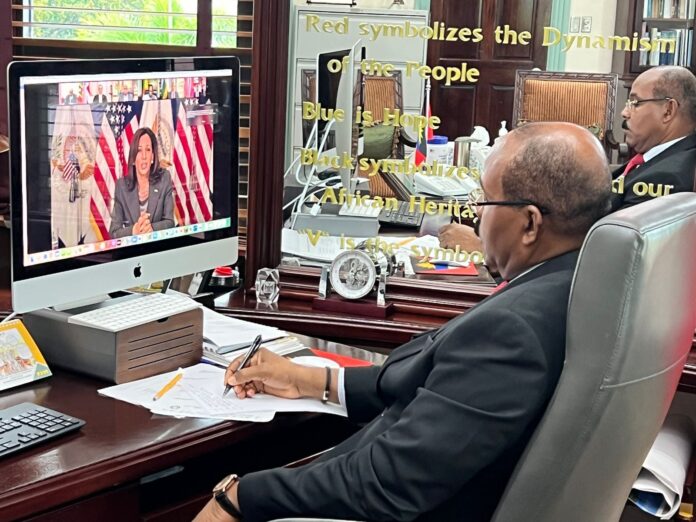 Prime Minister Gaston Browne says he hopes last week’s discussions between the United States Vice President, Kamala Harris and several Caribbean Community (CARICOM) leaders will not turn out to be another occasion of “diplomatic exercises”.

“I would say a good first meeting. I hope it is just not one of those diplomatic exercises…some of them just want to say that they engaged the Caribbean (and) year after year you see nothing substantive coming from them.

“I hope Kamala will deliver and I hope too that there will be a subsequent summit with President Biden,” Browne said, adding “the United States needs to treat us better.

“They need to understand that look…you could end up with some Caribbean people going to their shores as refugees. So if you don’t help us to keep them here, then they will come to your shores and I am sure they don’t want that,” Browne added.

Last Friday, the Joe Biden administration renewed its commitment to the Caribbean, saying that partnership is “key” to “shared prosperity and security.”

In the virtual meeting that was also attended by the President of the Dominican Republic Luis Abinader, the US Vice President, who is the daughter of a Jamaican-born retired economist, said that “as a neighbour in the Western Hemisphere, the United States shares a common bond with the nations of the Caribbean.

“As neighbours, we know our partnership is key to our shared prosperity and security,” said in the meeting that was also attended by CARICOM Secretary-General Dr Carla Barnett.

“We also know that we have common challenges.  And that is why I’ve convened this meeting to strengthen our partnership and chart a path forward together.

The meeting focused on three areas, namely economic recovery, security, and climate and energy and the White House later said in a statement that the meeting “underscored the importance the Biden-Harris administration places on our partnerships throughout the Caribbean”.

Browne said that the regional leaders made a strong plea for Washington to assist the region by increasing the supply of fossil fuels given the increasing oil prices on the global market sparked by the ongoing Russian invasion of Ukraine.

“So we have asked for the United States to consider increasing its supply of fossil fuel …so that we can increase the supply of fuel and reduce the price. That is a critical requirement at this point in order to curb inflation, otherwise, we are going to continue to see an escalation in inflation which will create significant problems, especially for the poorer countries…

“So we have asked them to give serious consideration to that…and at the same time use their influence to encourage other countries, Saudi Arabia and so on to increase their supplies, even Venezuela,” Browne added.