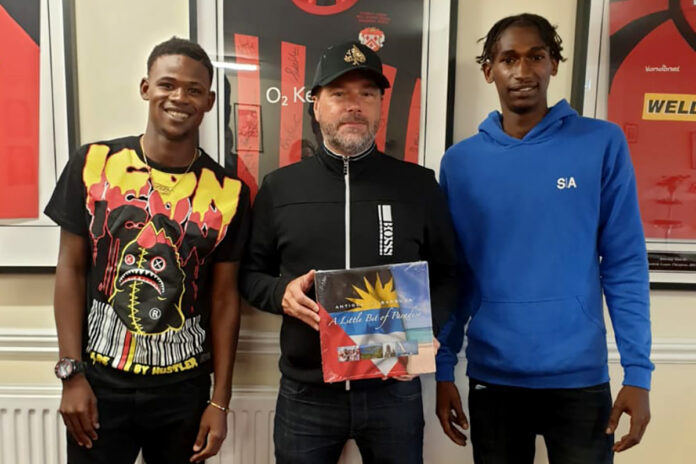 South Bend, IN- Defender Amali Colbourne and striker Troy Jules — who has represented Antigua and Barbuda at junior level — will join South Bend Lions for the 2022 USL League Two season, subject to League and Federation approval.

The Antiguans are the first recruits identified for the new season after impressing during an extended trial in England.

The opportunity for the youngsters initially arose after standout performances in front of coaching staff from the Future Lions Academy at the CAF University Identification Combine in 2019. The event was held in connection with Generation Next Football Club in Antigua — a partner club of Future Lions, which is owned by South Bend Lions’ principal investor Ritchie Jeune.

Having initially planned to attend trials during 2021 until COVID-19 prevented them from being able to travel to Indiana, the duo has spent time being assessed by coaches at Kettering Town during August.

Ritchie Jeune, South Bend Lions owner, said: “Our coaching staff at Future Lions have only spoken positively about the time they’ve spent working with coaches and players in the Caribbean.

“We are pleased the relationships we have worked hard on building are proving beneficial in identifying talented players that we can continue to help develop and provide opportunities to.

“Troy and Amali integrated themselves quickly and successfully with the group at Kettering, and I’m sure they will do well over an extended period of time in South Bend.”

Ambassador Ricky Santos, President of Generation Next Football Club, said: “We aim to provide the young footballers of Antigua and Barbuda with the opportunity to excel and achieve excellence through football. We are pleased that both Amali and Troy have demonstrated their ability and dedication to succeed in taking the next steps in their pathway.

“They have again impressed in assessments with the coaches at Future Lions and we are very proud of them. We look forward to seeing them progress in the USA next season and inspiring more players from the Caribbean to follow in their footsteps.”

The team will compete in USL League Two in 2020, the country’s top pre-professional men’s soccer league. Thanks to the collaboration of the leading local youth programs at Jr Irish Soccer, Indiana Invaders, Elkhart County United and Michiana Echo, the Lions have already kicked off preparations for their inaugural season by holding tryouts for a new U-18 program which will provide a pathway for local youth players.

South Bend Lions will become the second USL club in the state of Indiana — after Indy Eleven joined the USL Championship in 2018 — and the new franchise will play in the Great Lakes Division of USL League Two.