Trinidad and Tobago one of the larger Caribbean territories with a population of approximately 1.3 million people, plays host to one of the most popular international Carnivals, and is world renowned for its Carnival culture.

Following on from previous efforts of the ABTA in the Trinidad market, the Antigua and Barbuda delegation conducted media appearances on leading Trinidad radio stations, as well as local TV, inviting all to visit Antigua and Barbuda for the upcoming cricket, as well as, the 60th Carnival Anniversary, and just for vacation any time of the year. 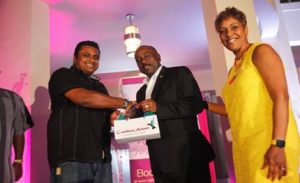 The team also had meetings with some of Trinidad’s most prominent mas bands such as TRIBE Carnival, Ronnie & Caro, Fantasy, and YUMA.

The Road Show culminated with a media Cocktail Launch hosted at Estate 101 in Maraval on Thursday, June 15th. The Cocktail launch was well attended by representatives of Caribbean Airlines who gave away a prize trip to Antigua and Barbuda.

Also in attendance were members of Trinidad’s National Carnival Commission, local media celebrities, journalists, several travel agencies, representatives from the local hotel association, as well as legendary calypsonians such as Ronnie McIntosh and Gypsy, and other invited guests.

The highlight of the evening was the unveiling of Antigua mas costumes, where guests were dazzled by the splendor of Antigua’s Carnival with a preview of carnival costumes by Antigua Mas Band, Beautiful People.

A sponsored trip to Antigua’s 60th Carnival was also given away compliments LIAT – The Caribbean Airline. This package included roundtrip airfare, hotel accommodation, and tickets to all the Carnival shows.

The Antigua and Barbuda delegation received a warm reception from the Trinidad public with persons wanting to get as much information as possible on all the activities taking place for the big 60th Anniversary Celebrations.

The Antigua delegation also treated guests to the launch of the ABTA’s ‘Summer of 60’ Promotion, which gives travel agents and visitors alike, the opportunity to get discounted offers and specials on the Antigua and Barbuda Tourism.