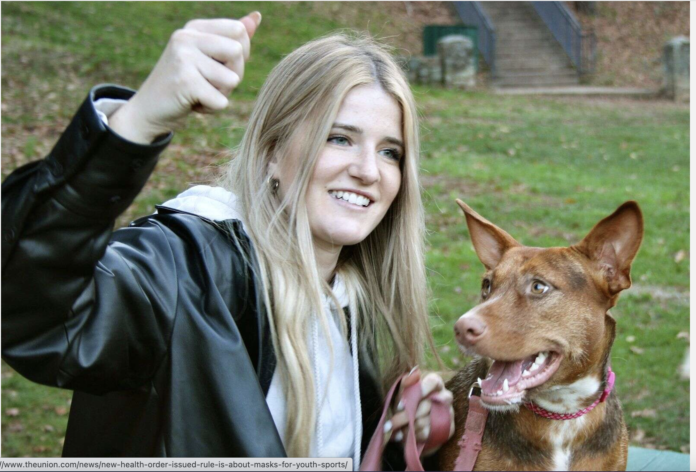 THEUNION: A Nevada City High School senior, who had never been on a sailboat or to the Caribbean, found a cause with paws.

Giorgia Glassford, 18, journeyed to Antigua, just north of the island of Guadeloupe, in November 2020 with her family. Time was spent island hopping to Barbuda and several ports between the neighboring harbors, getting to know the local culture with the help of an American ex-patriot, Gary Aksamit. He helped with their purchase of a 48-foot Amel Maramu sailboat they named the Flaneur (stroller), rigged with an inboard motor.

Glassford couldn’t help but notice the numerous feral dogs abandoned by owners or even those at homes. People tied up their dogs outside their homes and left them food and water. However, it often wasn’t enough to sustain them and many dogs looked neglected, Glassford said.

“If a dog was too young or old or no longer useful as a guard dog, people would leave them on a beach well known as a depot for unwanted animals,” said Glassford. “You could see their ribs exposed and they were covered with a kind of mange. And they didn’t really look like dogs to me, but kind of skeleton-like. It was kind of surprising to see that level of neglect because you don’t see it in Nevada County. But we learned it’s a kind of normal situation in third world countries.”

The harrowing picture of the animals’ neglect wouldn’t leave their minds. After discussing the issue among her family, one of their new island friends tipped them off to the nonprofit, Dogs and Cats of Antigua (DACOA). Glassford’s family agreed it was a terrible situation and decided to adopt a dog through the nonprofit. Once completing an online application, their approval came through and Glassford was teamed up with an 8-week old American Staffordshire terrier mix named Tiga.

“She’s an amazing, affectionate, smart and athletic dog,” said Glassford. “But when I noticed the stay dogs and heard how they were mistreated, I reached out to DACOA to see how I could help. We signed up to be travel buddies to fly five pups home to San Francisco.”

Taking Tiga to the airport, she became a little jittery. But the real disappointment was when the airport ticketing agent would not permit her to fly back with five dogs and only allowed two of the dogs to to fly in carriers stashed underneath their seats.

It was the denial from the ticketing agent that inspired Glassford to start her website, Antigua Puppy Project.

It is soliciting funds to help get abused and abandoned dogs to the U.S. from the Caribbean. The website has a GoFundMe.

After launching the site in summer, she raised around $4,000. That was enough for 25 dogs to fly last month, along with the vaccinations and the paperwork required, said Jeannine Glista, Glassford’s mother.

“It went really well,” Glista said. “They’re trying to do another puppy airlift. They’ll get them out as they can. She wants to get them all out.”

Glista in an email said Glassford is committed to raising a total of $9,000, the goal of the GoFundMe. That would allow for another, mid-February airlift of 25 dogs.

The dogs airlifted last month went to Miami, then by van to Dog Haven, an animal shelter in Moravia, New York, where a number of families have already adopted some of the dogs, said Glassford.

“Some people may ask why go through all the trouble to get the dogs into the U.S. to put them in a shelter,” said Glassford. “But these dogs in Antigua were abandoned in the street, no food or water. And the smaller dogs get hit by cars. They’re just puppies and they don’t know how to survive. But when we bring them back they get connected with loving families.”

Glista has supported the puppy project from the start. She said once the animals are rescued, the change in them is amazing. They are more vibrant, better socialized and more adoptable. However, Glista said she wanted to clarify that Glassford is not creating her own nonprofit.

“I would refer to her project, the Antigua Puppy Project, as an initiative,” she said. “It’s because she’s doing more than just raising money … she’s trying to find homes for the pups. And she is coordinating logistics with the nonprofit, Dogs and Cats of Antigua.”

Glista said she is proud of Glassford’s puppy project, as she is so passionate about the dogs and was sincerely affected by what she saw in Antigua.

“I think she’ll turn it into a social enterprise, making dog beds or other dog supplies and sell online,” she said. “Part of what spurred her, we developed a bond and a new connection with the people we met while on sabbatical there. If it had just been a vacation, it may have not developed into such a strong alliance with the people of Antigua.”

William Roller is a staff writer with The Union. He can be reached at [email protected]