Antigua and Barbuda today registered its objection to a resolution which could pave the way to expel Venezuela from the Organisation of American States.

The OAS passed the resolution with a vote of 19 to four, with 11 countries abstaining blasting the South American nation for turning its back on democracy and abusing human rights.

In a footnote, Antigua and Barbuda said it does not consider itself bound by its provisions.

Antigua and Barbuda also objected to what it said was the exclusion from deliberations of the Member State about which the resolution is concerned and reiterated the principle of the non-intervention in the internal affairs of Member States as contained in the letter of the Charter of the OAS.

“Antigua and Barbuda rejects all references in the resolution to the Permanent Council Meeting which was illegally held on April 3rd 2017 and the resulting declaration.

Antigua and Barbuda does not consider this resolution on the Situation in Venezuela as having achieved consensus among Member States and as such does not provide any legal basis for future reference or action.”

The majority of Caribbean Community (CARICOM) countries abstained from a vote at the Organisation of American States (OAS) as the hemispheric body approved a resolution calling for an extraordinary assembly to vote on suspending Venezuela from the 34-member group.

The resolution was spearheaded by the United States as it condemned President Nicolas Maduro’s re-election last month.

The OAS’s general assembly voted with 19 member states in favour, four against and 11 abstaining, to take the first step to suspending the South American nation. 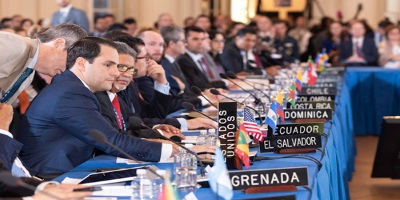 Maduro won the May 20 election that the Venezuelan opposition, along with Washington and other Latin American countries, have decried as a sham.

OAS members have expelled only two nations in its history. Cuba was forced out in 1962 and Honduras was suspended briefly following a 2009 military coup. The ban of Cuba was lifted in 2009, but the island country rejected re-joining the organization.

According to Tuesday’s vote, the Bahamas, Barbados, Guyana and Jamaica supported the resolution, while Dominica and St. Vincent and the Grenadines voted against the measure.

But Belize, Grenada, Haiti, St. Kitts-Nevis, St. Lucia, Suriname and Trinidad and Tobago, were among the 11 member states that abstained during the vote.

Venezuelan Foreign Minister Jorge Arreaza said Caracas rejected the OAS Assembly’s decision and it would enable the United States to continue its “economic war” against the socialist government.

“Those that have supported this are supporting the possibility of a military intervention in Venezuela. Let that be on your conscious,” he said.

President Maduro has already described the OAS as a pawn of US foreign policy and last year his government said it had started the two-year process to pull out of the organization.

But US representative to the OAS, Carlos Trujillo, said he was pleased with the vote, adding “I’m glad we are recognizing that democracy matters. We will not recognize illegitimate governments”.

The resolution, adopted at the OAS’ fourth plenary session, states that the elections did not comply with international standards, failed to meet the participation of all Venezuelan political actors, and were “carried out without the necessary guarantees for a free, fair, transparent and democratic process.”

The resolution reaffirms that “only through a national dialogue with the participation of all Venezuelan political actors and stakeholders can national reconciliation be achieved and the necessary conditions agreed upon for holding a new electoral process that truly reflects the will of the Venezuelan citizens and peacefully resolves the current crisis in that country.”

The OAS said the resolution reiterates that “an unconstitutional alteration of the constitutional order of the Bolivarian Republic of Venezuela has occurred,” as stated in an April 3, 2017 resolution.

The resolution urges Venezuela to take steps to guarantee the separation and independence of the constitutional branches of power and “restore the full authority of the National Assembly, the rule of law, and the guarantees and liberties of the population.”

It also urges Venezuela to allow the entry of humanitarian aid and to implement epidemiological surveillance measures in its country to avert “the aggravation of the humanitarian and public health crisis, particularly against the reappearance of diseases, such as measles, malaria and diphtheria.

The resolution instructs the OAS Permanent Council to identify, in coordination with the relevant inter-American and international institutions, the appropriate measures to support the member states that are receiving an increasing number of Venezuelan migrants and refugees.

In addition, the resolution calls on the member and permanent observer states to implement, in accordance with their respective legal frameworks and applicable international law, the measures deemed appropriate at the political, economic, and financial levels to assist in the restoration of democratic order in Venezuela.