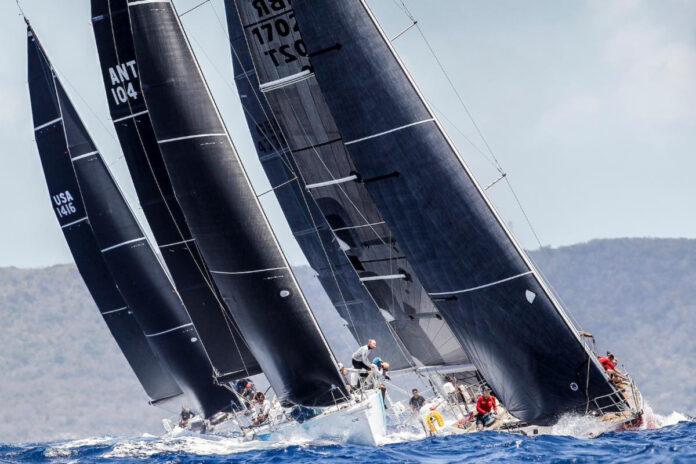 Antigua Sailing Week Race Manager, Jaime Torres runs through the runners and riders and the provisional class splits for the world-famous Antigua Sailing Week celebrating the 53rd edition of the bucket-list Caribbean regatta.
Racing starts on 30 April with the stand-alone Peters & May Round Antigua Race on Saturday 30 April. This year a shorter course has been introduced for boats with a lower CSA Rating, cunningly named the Almost Round Antigua Race. Five days of red-hot racing follow for Antigua Sailing Week with teams alternating between two race courses; Windward and Rendezvous. The on-the-water action is punctuated by the mid-regatta Reggae in the Park with chart-topper Romain Virgo, followed by all the fun you can handle on Pigeon Point Beach for Lay Day.
“It’s been three years – way too long!” commented Race Manager Jaime Torres. “The weather is here, the sailors are here, we have great racing boats, it’s going to be incredible! We are expecting typical conditions of 15-20 knots, partly cloudy with up to three metres of sea state. The class splits have evolved in an organic and thoughtful way. Not only do we look at CSA Rating but also parameters such as Hull Factor. Also, through years of experience we know which boats like to race against each other. The purpose of the class splits is to offer close racing and that is not achieved simply by using CSA Rating.”
START BOAT A – Neil Andrew (RO)
CSA Racing 1 & 2
CSA Racing 1 & 2 has always been reserved for the largest high performance race boats at Antigua Sailing Week, and this year they will have a full-on combined start. Two Volvo race boats will be surfing around the race track. The all-Lithuanian VO65 Ambersail will have a crunch-match with Volvo 70 Ocean Breeze, chartered to Steve Travis from the Seattle Yacht Club. Fast40+ Tschuss skippered by Johnny Mordaunt and Jean Yves Thomas’ IC52 Mahana will be evenly matched in CSA Racing 2. Tschuss may be the smallest, but she is ridiculously fast for her size. It is great to see the brand-new design Mahana at the regatta, a luxurious cruising boat with an all-out race boat deck layout. The cool thing is that Mahana has been enjoying cruising through the Caribbean before coming to her first regatta at Antigua Sailing Week.
American Gunboat 68 Tosca, co-skippered by Ken Howery and Alex Thomson will be taking part in its debut inshore regatta. Tosca will start with CSA Racing 1 & 2, giving the excitement of close racing for the first beat, then race a course, tailored as much as possible to the team’s wishes. Tosca is an incredible machine which has a downwind top speed of close to 40 knots.
CSA Racing 3
The high-performance Swans will race together with Peter Anthony’s Antiguan Farr 65 Spirit of Juno and British Lombard 46 Pata Negra. Shahid Hamid’s British Swan 58 OMII makes its debut. Two Swan 601s will be racing with identical CSA Ratings, Adrian Lee’s Irish Lee Overlay Partners II is the reigning CSA Racing 3 champion and will be up against Hein D’Haene’s French team on Lorina. The wild card, so to speak, is the British Lombard 46 Pata Negra, skippered by Jonathon Pudney. Pata Negra has the shortest waterline length in the class but has been very successful in the Caribbean and has been very competitive against bigger boats.