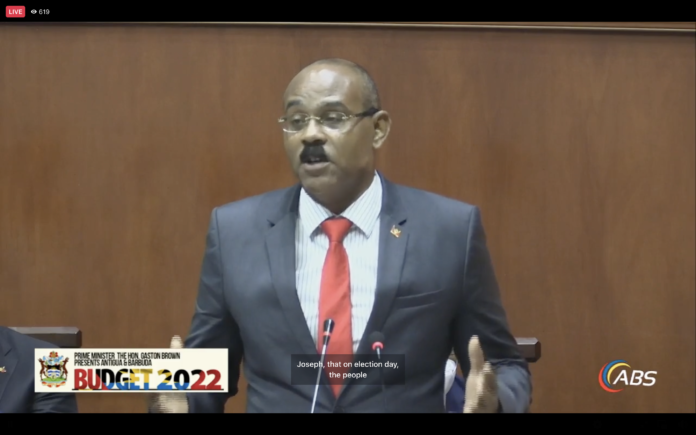 Prime Minister Gaston Browne, delivering the EC$1.64 billion budget to Parliament on Thursday, said that the bond with a 10 year, 4.5 per cent instrument registered on Euroclear, “is the first and largest bond of its kind issued by Antigua and Barbuda and it has been fully subscribed.

“This financing provides an incredible opportunity for the government to re-profile its debt, to ensure sustainability going forward, and to invest in strategic projects that will drive economic growth, create employment, and generate increased revenue to finance government operations.”

Browne said that the proceeds from this bond will be used to implement projects that will stimulate the economy and secure growth of eight per cent this year.

But Browne said that despite the government being able to raise the money on the international market, a grave anomaly still exists in the way that successful small economies are treated by the international financial institutions and some wealthy countries.

He said developing countries, including some in the region, received financial support from traditional sources such as World Bank and the International Monetary Fund (IMF) to help mitigate the effects of the coronavirus (COVID-19)  pandemic on their populations, without having to adopt adjustment programmes and austerity measures that are typically associated with financing from these institutions.

“However, though we too were facing significant economic and social hardships as a result of the pandemic, Antigua and Barbuda did not benefit from the special financing windows intended to help countries impacted by the crisis that has crippled the globe for nearly 24 months.

“That is because, without any regard for the vulnerabilities we face, we are disqualified because of the flawed criterion of high per capita income,” Browne said, adding that “even though our revenues also plummeted, and our people also faced the loss of life and livelihoods, our so-called high-income status prevented us from accessing much-needed financing.

“We are the victims of our successes in transforming our nation and achieving high per capita income, social development and political stability in which democratic principles are upheld; including the right to trade union representation and better conditions of employment.

“Further, our attempts to access the IMF’s Rapid Financing Instrument, which is not tied to an IMF programme, was derailed because of our indebtedness and arrears to Paris Club creditors, who, even in the height of the pandemic, refused to reschedule our debt.”

But he said he is happy to note that the efforts of Caricom to present the case for the inclusion of vulnerability in the determination of a country’s eligibility for development assistance have gained traction.

“We intend to continue to pursue this inequity vigorously in every international organisation and bilateral encounter,” Browne said.

Meanwhile, Antigua and Barbuda said that it had received EC$123.1 million in revenue from the Citizenship by Investment Programme (CIP) which provides citizenship to foreign investors in return for making a substantial investment in the socio-economic development of the island.

Antigua and Barbuda is among several Caribbean countries utilising a CBI programme and Prime Minister Browne said that last year a total of 498 applications were received reflecting a 36 per cent increase over the number of applications received in 2020.

“Total revenues generated by the CIP programme for the year 2021 amounted to $123.1 million and helped to cushion the adverse effects of declining government revenues from other sources. Those monies were used primarily to help our health sector in our national fight against COVID-19 for the benefit of all our people,” Browne added.