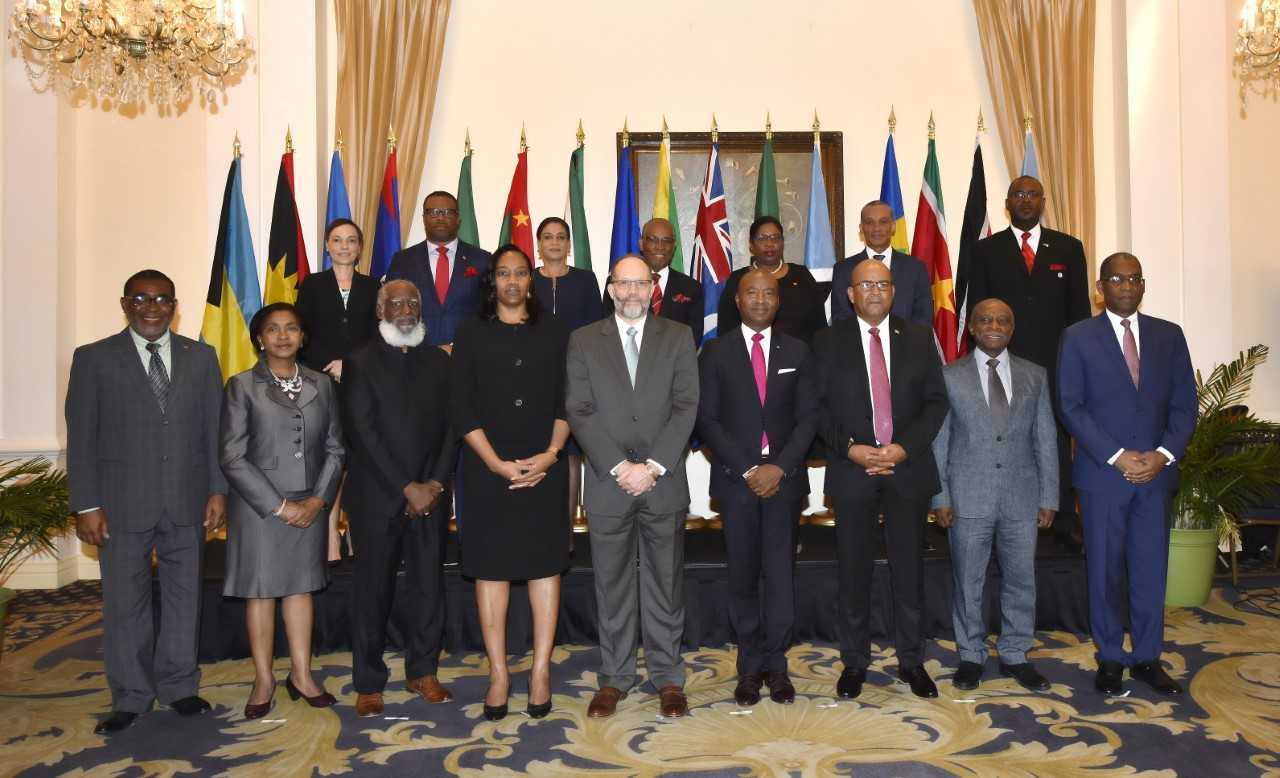 The 21st meeting of the Council for Foreign and Community Relations (COFCOR) of the Caribbean Community (CARICOM) convened in Nassau, The Bahamas, May 7-8 under the chairmanship of Minister of Foreign Affairs of The Bahamasthe Honourable Darren Allen Henfield.

Permanent Secretary of the Ministry of Foreign Affairs and Foreign Trade Cecile Humphrey represented Barbados; Ambassador to CARICOM and the Organisation of Eastern Caribbean States (OECS) and Permanent Secretary of the Department of External Affairs Her Excellency Elma-Gene Isaac represented Saint Lucia and Head of International Relations His Excellency Anthony Severin respresented the OECS Commission.

The Secretary-General of the Caribbean Community His Excellency Irwin LaRocque and the Minister of Foreign Affairs of The Bahamas and Chair of the COFCOR the Hon. Darren Allen Henfield addressed the opening ceremony. Cecile Humphrey also delivered remarks on behalf of Minister of Foreign Affairs and Foreign Trade of Barbados and immediate past chair of the COFCOR the Honourable Sen. Maxine McClean.

The secretary-general pointed out that at this annual meeting, contrary to the preceding year, the council would narrow its perspective and focus on developments in the Latin America and Caribbean region that were of increasing concern to the community, discuss the strengthening of relations with traditional partners, and the widening of its outreach to non-traditional partners. He underlined the importance of effective multilateralism and concerted action in confronting the wide range of challenges facing the community. In this regard, he highlighted CARICOM’s success in bringing global attention to issues of regional concern such as noncommunicable diseases, graduation from access to concessional financing, climate change, the vulnerability of small island developing states (SIDS), and the treatment of undocumented British citizens of Caribbean descent resident in the United Kingdom, the “Windrush Generation.” Recognising that the region was still recovering from the climatic disasters of September 2017, Ambassador LaRocque underscored the critical importance of continued and joint advocacy to facilitate the access of member states to concessional financing to build resilience. Lastly, he urged the COFCOR to continue to strengthen its coordination of foreign policy to realise further success for the benefit of the community.

In the remarks delivered on behalf of Sen. McClean, Cecile Humphrey indicated that the minister was honoured to have served as chair of the COFCOR for the previous year. The minister underlined the need for the COFCOR to continue to remind the international community that vulnerability should be factored into consideration of eligibility for concessional development financing and official assistance. The minister expressed appreciation to international development partners and partner institutions, which made resources available to the region to assist with disaster recovery efforts.

In addressing the opening ceremony, the incoming chairman of the COFCOR, the Hon. Darren Allen Henfield extended praise to McClean for her commendable leadership during her tenure as chair of the COFCOR. Henfield underlined that the government of the Commonwealth of The Bahamas, under the leadership of the Prime Minister the Hon. Dr. Hubert A. Minnis, recognizes that the country’s interests are best served “by its active participation in regional, hemispheric and international organisations, whilst promoting and maintaining close relations with our neighbours” among other partners. The minister emphasised his belief in the collective strength of the Caribbean community, particularly as it related to foreign policy. He declared that he was committed to ensuring that the council worked, “collectively towards the realisation of our goals and objectives, which are intended to derive maximum benefit for the people of our region.” He noted that member states of the community might be SIDs, but, as a collective, CARICOM was able to “punch well above its weight when we speak with one voice.”

The COFCOR reviewed its relations with its traditional partners and discussed ways and means of consolidating them. Foreign ministers considered the various issues related to United States (US) foreign policy and areas of mutual interest and proposed the widening of mechanisms for dialogue for the community’s continued engagement with the U.S. In so doing, they recognised the need to take advantage of the framework provided by the U.S. Strategic Engagement Act with the Caribbean (HR4939).

The council was updated on the efforts underway to retain the community’s trade relations with regard to the Community’s engagement with the UK Post-Brexit and reaffirmed the importance of regular engagement with the UK on matters of mutual interest.  In this regard, they welcomed the high-level engagement in London between the British prime minister and CARICOM heads of overnment at which they discussed issues of priority concern to the community, including the situation of undocumented British citizens of Caribbean descent.

The council welcomed the revitalisation of its engagement with Canada. In recognising the importance of regular political engagement, the COFCOR considered proposals for increasing CARICOM-Canada interaction. The COFCOR took note of Canada’s new development assistance priorities, which spoke to several areas of concern to the region. Ministers also welcomed the invitation extended to the community to participate through the heads of state and government of Haiti and Jamaica in the forthcoming G7 meeting in Canada in June 2018.

The COFCOR looked at the common challenges faced by small states and reaffirmed the importance of continued engagement with small state groupings, such as the Pacific Islands Forum and the Indian Ocean Commission, in order to address jointly in international fora, especially at the United Nations, the unique and particular vulnerabilities of SIDS more effectively.

With regard to the UN, the COFCOR considered issues relating to the reform of the United Nations Security Council and the development of an international legally-binding instrument on the conservation and sustainable use of Marine Biological Diversity of Areas Beyond National Jurisdiction (BBNJ). They also underlined the importance of effective preparations for the forthcoming 24th Conference of the Parties to the United Nations Framework Convention on Climate Change (COP 24) in Poland Dec. 3-14. They also discussed preparation for the high-level UN meetings on tuberculosis and noncommunicable diseases (NCDs), in this latter regard took note of the briefing transmitted by the Healthy Caribbean Coalition. The COFCOR underscored the importance of the S.A.M.O.A. Pathway for SIDS and particular attention was paid to the forthcoming review of this process and to regional preparations, including the hosting of the Caribbean Regional Preparatory Meeting on the Review of the S.A.M.O.A. Pathway by Belize Aug. 7-8.

In discussing developments in the hemisphere, Foreign Ministers reflected on the impact on and implications for the Community of matters arising in the wider hemispheric region, and discussed strategies for promoting the Community’s interests.

The Council reflected on the outcomes of Commonwealth Heads of Government Meeting (CHOGM) held in London, United Kingdom, April 18-20, in particular the adoption of the Blue Charter and the facilitation of and CARICOM heads of government on the matter of the Windrush Generation.

The COFCOR also noted the outcomes of the Eighth Summit of the Americas held in Lima, Peru, April 13-14, in particular the Lima commitment on democratic governance against corruption.

The COFCOR considered the Preparations for the ACP-EU Negotiations for a Successor Agreement to the Cotonou Partnership Agreement. In view of the importance of the ACP-EU Post-Cotonou relationship, the meeting welcomed the report of the secretary-general of CARIFORUM concerning the ACP/EU Post-Cotonou relations and the outreach programme being spearheaded by Jamaica. The council urged ministers to ensure the highest levels of participation in the forthcoming 107th Session of the ACP Council of Ministers and the 43rd Session of the ACP-EU Joint Council to be held in Togo in May. The meeting reaffirmed the position taken by CARIFORUM foreign ministers at their meeting in St. Kitts and Nevis in April 2018 where a preference for an all ACP-approach was established.

Interactions with Representatives of Third States

Side meetings were also held with Minister of International Development and La Francophonie of Canada the Hon. Marie-Claude Bibeau and Acting Principal Deputy Assistant Secretary for Western Hemisphere Affairs, Department of State of the United States, Ambassador Kenneth Merten.

The COFCOR received an update on the most recent developments between Belize and Guatemala. The COFCOR expressed concern that the undertaking by both countries and the Organization of American States (OAS) to engage in the design and development of a mechanism of co-operation for the Sarstoon River, remains outstanding, and they reiterated their call for both countries and the OAS to redouble their efforts in this respect.

They expressed their hope that both countries will continue advancing their efforts to fulfil all their obligations under the special agreement. In this context, they noted with satisfaction that in accordance with the Special Agreement to Submit Guatemala’s Claim to the International Court of Justice, Guatemala successfully held its referendum on April 15 and that Belize has set the date for its own referendum for April 10, 2019.

COFCOR expressed support for the continuous and critical role of the OAS in the process aimed at resolving the dispute arising from Guatemala’s claims on Belize and further called on the international community to continue supporting the OAS Office in the Adjacency Zone. COFCOR emphasized their unflinching support for the sovereignty, territorial integrity and security of Belize.

The COFCOR noted that the government of Guyana had filed its application with the International Court of Justice (ICJ) on March 29 in keeping with the decision by the secretary-general of the United Nations issued Jan. 30, within the framework of the Geneva Agreement of 1966, to choose the ICJ as the means that is now to be used for the settlement of the controversy between Guyana and Venezuela. Ministers noted that the decision of the secretary-general, which was in accordance with the principles and purposes of the United Nations Charter, was intended to bring a peaceful and definitive settlement to a longstanding controversy. The COFCOR reiterated its unequivocal support for the maintenance and safeguarding of Guyana’s sovereignty and territorial integrity.

Foreign ministers received the presentation by Special Representative of the United Nations Secretary General for International Migration Her Excellency Louise Arbour. They discussed the global issue of migration and its dynamics in the region, which is affected by an inflow of migrants from regional and extra-regional sources. Ministers emphasised the importance of participating in the intergovernmental consultations to develop the Global Compact for Safe, Orderly and Regular Migration and to seek the support of the International Organization for Migration (IOM) and the Office of the United Nations High Commissioner for Refugees (UNHCR) in addressing current and future migration challenges.

The ministers expressed to the government and people of the Commonwealth of The Bahamas their deep appreciation for the warm hospitality, excellent arrangements and courtesies extended, which facilitated the successful deliberations of the 21st meeting of the COFCOR.