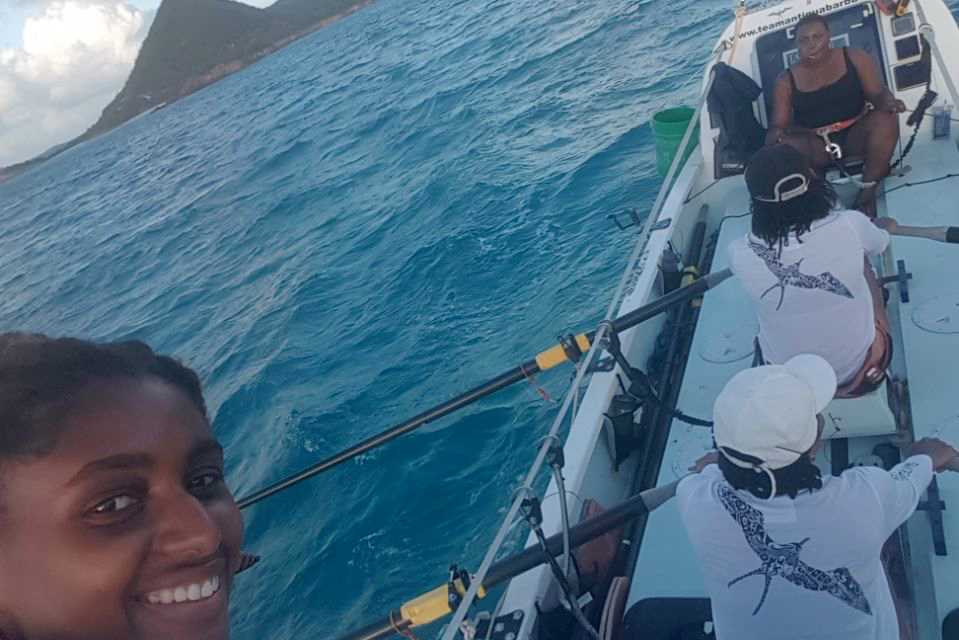 Coach Eli Fuller averaged that they would take approximately 20 hours to row the 60 miles from Antigua to St. Kitts, their first international rowing experience. Team Antigua Island Girls made landfall on the morning of May 9, in just over 14 hours.

That they never stopped rowing, not even with the seasickness of three of the four crewmembers, is proof of their conviction. The fifth member, a final year student at All Saints Secondary, missed the trip because she was taking CXC exams.

“The longest period should be 26 hours and the shortest between 15 to 16, and they did it in almost world record pace,” Fuller said, noting that if the team can row like that across the Atlantic for 30 days, then it will be mission accomplished.

The team of Elvira Bell, Christal Clashing, Samara Emmanuel, Kevinia Francis and Junella King has been training for the 2018 Talisker Whisky Atlantic Challenge since February.

They have set as their goals to be the best women’s team, a podium finish overall and to raise significant sums for their charity, Cottage of Hope. Fuller, a lifelong seafarer and captain of Team Antigua Atlantic Rowers, which placed second in the 2017 edition, is confident in Team Antigua Island Girls’ abilities.

“They are more advanced than any other team currently training for the event in terms of their preparation. They don’t have a lot of ocean experience like the other teams but they are gaining it rapidly. They are very dedicated and although the teams that I have seen registered so far seem to be more competitive than in the past, Team Antigua Island Girls can win the Women’s Division. They are definitely going to have a podium finish,” Fuller said.

Captain Karl Belizaire and the crew of charter yacht Sanity hosted Team Antigua Island Girls on their recent row to St. Kitts and towed them home. The trip provided the opportunity for the women to gauge themselves.

“The training to St. Kitts confirmed what we already knew about ourselves: that we’re in this, not just to participate, but to be highly competitive. Individually, each of us has wanted to do this and to do it well, so it’s safe to say we are a team well met and one that will make Antigua and Barbuda proud, just like the first two teams before us did,” Francis said.

Between now and November when they leave for La Gomera where they will spend two weeks before the start of the race, the women will be in intense training – on the water, in the gym, and mentally.

The team and their coach anticipate that they will log around 300 miles before the start of the race, which is well above the 72 required by the organizers.