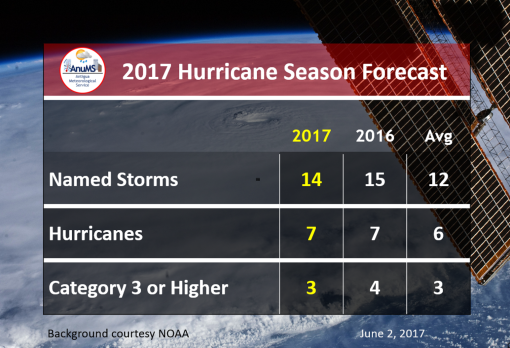 Antigua & Barbuda has a 63 per cent chance of being impacted by one of the named storms for the 2017 Atlantic Hurricane Season, Climatologist Dale Destin has said.

Writing on his official blog to mark the start of the hurricane season, Destin revealed that when compared with last year, the twin-island state has a higher chance of being hit.

“The probability of Antigua being hit or brushed by one or more named storm this year is around 63 per cent – up 14 per cent from the average of 49 per cent.

“The probability of one or more hurricanes is 22 per cent – down 15 per cent from the average of 37 per cent,” he said.

Destin explained that these numbers were calculated based only on the likely best similar years (1957, 1969, 1979 and 2006) to the upcoming hurricane season according to Klotzbach.

“Of these years, we were hit by Tropical Storms Claudette, Frederic and Chris and brushed by Hurricane David,” he said. 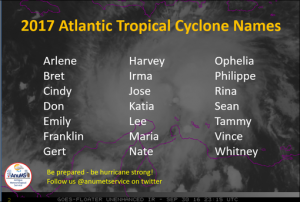 However, he admitted that at the end of the day, these numbers don’t mean a whole lot.

“We could be hit by one or more named storms or none at all. Bottomline – we truly do not know what is going to happen, with any certainty.”

He told readers that, regardless of the probabilities and forecasts, we need to prepare, adding “it only takes one tropical cyclone to set you back for years”.

Antigua averages one hurricane every three years and one named storm every two years or every other year.