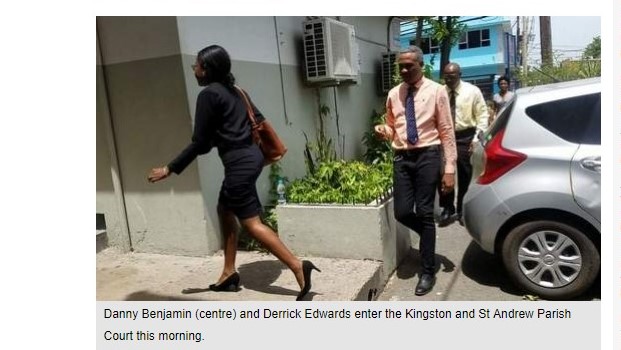 Danny Benjamin, equipment co-ordinator of the Antigua and Barbuda Football team could not hold back tears and wept openly in the Kingston and St Andrew Parish Court this morning after his trial on drug charges was postponed to June 14

The 48-year-old is jointly charged with assistant coach Derrick Edwards, 49, with possession of ganja, dealing in ganja, taking steps to export ganja and conspiracy after 3.6 pounds of ganja was reportedly found in their luggage on March 26 at the Norman Manley Airport in footy streams

Benjamin and Edwards were travelling home with the Antigua and Barbuda football team after a 1-1 draw with Jamaica at Sabina Park the day before they were arrested.

Both men were scheduled to start their trial at 9:00 this morning before Parish Judge Jacqueline Wilcott, but when the matter was called up the judge recused herself and transferred the matter before another judge, Broderick Smith.

However, when the case was mentioned before Smith, it was disclosed that the matter could not start and a new court date was fixed.

But, while the defence and the prosecution were trying to agree on a date, frustration and distress were evident on both the accused faces.

Both men were observed hanging their heads and shaking it repeatedly before Benjamin burst into tears with both his hand shielding his face as he cried.