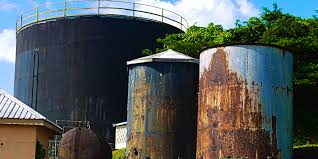 Following a first of its kind occurrence in the Antigua Distillery’s 85-year history, Managing Director of the company Anthony Bento says the company has moved into swift action to minimise any negative results from the unusual incident.

Efforts to remove the spill have been underway since Saturday evening. Truckloads of backfill and a backhoe have been brought in to spread the fill, and to absorb the excess molasses both inside the distillery compound, and on the main road in front of the distillery. A water truck was also brought in to wash the main road of any residual molasses that may have travelled onto it from the storage tank.

On Saturday 10th June, following receipt of a 2000 metric tonne delivery of molasses the previous day (Friday 9th), it was discovered that molasses was overflowing from the distillery’s 2500 tonne capacity storage tank. Upon physical inspection, it was found that a thick layer of foam had formed on top the molasses. The foam was found to be leaking through the vents under the roof of the tank. The ship was immediately notified to stop pumping and mitigation measures were put in place. Once these measures had been carried out and the overflow of foam had subsided, pumping resumed later that evening and was completed by 10.30 p.m. No further overflow was observed from the tank that day except the residual on the side of the tank from earlier in the morning.

On the morning of Sunday 11th, the main storage tank located at the deep-water harbour began foaming over again. A vacuum truck was called to remove the spill-over molasses and additional truckloads of backfill were brought in. By later that day, the foaming had subsided.

On Tuesday 13th representatives of the Environmental Division, the Antigua Port Authority and the Prime Minister’s office met with management and technicians from the Antigua Distillery to register their concerns. At the conclusion of that meeting, the Environmental Division representative was satisfied that all efforts were being made to curtail the flow of molasses into the sea and to minimize any effect on marine life.

To date, the primary concern since this incident, – one that is currently affecting staff at the Antigua Port Authority – continues to be the pungent odour emitted by the spill. The Antigua Distillery is working assiduously to ensure that the situation will be fully contained by this weekend.

The Antigua Distillery takes a proactive approach to managing its environmental footprint. Several years ago, a shoreline study conducted by the Environmental Division found the company to be compliant with what was expected within that bay area.

According to Managing Director of the Antigua Distillery – Anthony Bento, “the company has always placed an emphasis on ensuring the environment is not endangered as a result of our activities.” He adds, “for the past two years, the company has been involved in a pilot study with a US biotechnology firm to find ways of managing its effluent. This is a Caribbean wide problem in the rum industry.”

The Antigua Distillery takes full responsibility for this incident and is currently conducting further investigations into what caused the accident. Among the initial indicators is the fact that the pumps customarily used to transfer the molasses – standard positive displacement pumps – were not available owing to a different system used by that vessel. At no time prior to this incident was the Antigua Distillery informed of issues related to the condition of the molasses these details by the supplier Rosadani Sourcing Corporation, nor the ship itself.