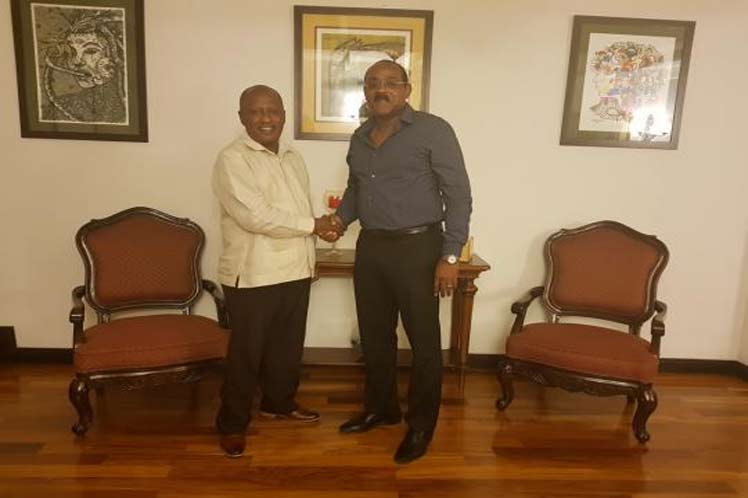 The Prime Minister of Antigua and Barbuda, Gaston Browne, expressed today his strong rejection of the measure of FedEx, a US international parcel delivery company, to suspend services to the Cuban embassy here.

Diplomatic sources indicated the Antiguan prime minister held a fraternal meeting with the Cuban ambassador, Gustavo Veliz, to whom he confirmed his government’s support for the demand to lift the blockade imposed by the northern nation on Cuba more than 50 years ago.

The FedEx Company argued its decision – valued by Cuba as unilateral – based on the policy of economic siege that Washington applies to Havana.

Browne also referred to the pressures faced by other countries in the region, as well as the economic and financial challenges they face given the limitations imposed by the United States, which prevent them from interacting with their banks anywhere in the world.

The opportunity was propitious for the dignitary to thank, once again, the bilateral collaboration in different sectors and the granting of scholarships to nationals of his country to study in Cuba.

During the meeting, both sides discussed issues of bilateral interest.

An official FedEx document addressed to Ambassador Veliz, to which Prensa Latina had access, reported that ‘as the country is subject to exhaustive U.S. sanctions, we could not transport any shipments to or from an embassy of the Cuban government.

As part of the blockade, the island continues to be prevented from freely exporting and importing goods and services to and from the United States and cannot use the United States dollar in its international financial transactions.

All this, denounce the Cuban authorities, hinders the normal development of his country in all spheres of economic, social and cultural life.