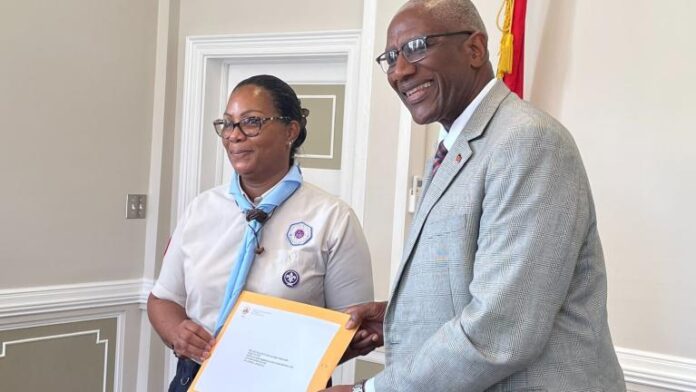 ABSA has been active as an overseas branch of The Scout Association in the United Kingdom since the early years of Scouting and has had a dedicated presence at major national and international events, including the the 2019 World Scout Jamboree as well as the Cubboree.

Founded in 1913, ABSA has full government support with the island nation’s Governor General, His Excellency (H.E.) Sir Rodney Williams, also serving as its Chief Scout. This backing has been crucial in ongoing projects, such as the establishment of ABSA’s headquarters and campgrounds.

Marking this milestone event, H.E. Sir Williams said: “Antigua and Barbuda Scout Association is one of the oldest organisations in our twin island nation. ABSA’s longevity and work with youth for over a century has been accompanied with a positive national profile”.

“Prior to the COVID-19 pandemic, the Founder’s Day event was a recognised activity in many schools across the nation and as such students were given the opportunity to replace their mandatory uniform with the Scout’s attire for that day,” he added. “In a similar manner, business places where Scout Leaders work also provide support for the organisation in the form of special leave or vacation to enable participation in Scouting events.

During a recent World Scouting field visit, planning for future actions and the provision of support through WOSM Services and team of WOSM Consultants were defined as capacity building priorities for the new National Scout Organization. Furthering these aims, ABSA is committed to expanding Scouting into new communities and the country’s more than 21,000 young people aged between 10 and 24 years.

Ahmad Alhendawi, WOSM’s Secretary General, congratulated the Scout Association on joining the Scout Movement as an official member saying that “we wish ABSA all the best in the further expansion of Scouting in Antigua and Barbuda as they continue to enable more young people to become active citizens who are making an impact in their communities.”

Across the Caribbean, there is similar potential for incredible growth. As an area of high priority, World Scouting will working closely with ABSA to support its membership expansion through growth plans and the development of a comprehensive growth strategy.

ABSA joins the world’s leading educational youth Movement following a recommendation by the World Scout Committee earlier this year. It becomes WOSM’s latest Member Organizations in Interamerica, one of the largest of the Movement’s six Scouting regions.

After gaining independence from the United Kingdom in 1981, Antigua and Barbuda became a member of the United Nations (UN). Its commitment to the UN’s 2030 Agenda for Sustainable Development and achieving the 17 Sustainable Development Goals (SDGs) provide unique opportunities for ABSA’s Scouts to support the Scouts for SDGs initiative — the world’s largest coordinated youth contribution to the SDGs. The Caribbean country is also a member of the Commonwealth of Nations.