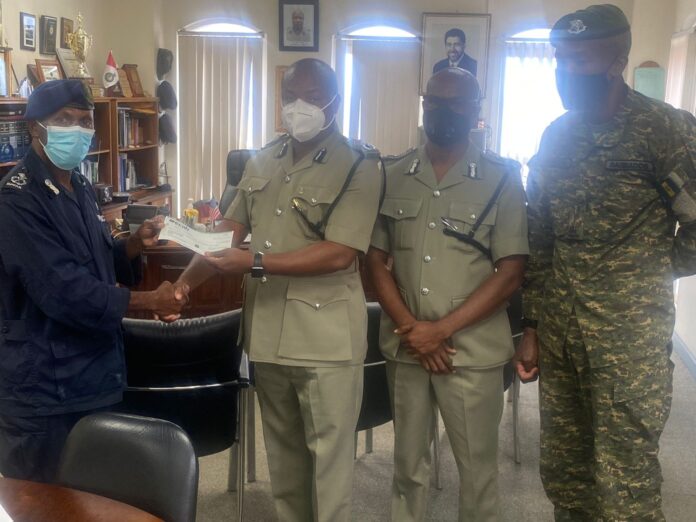 Members of the Royal Police Force of Antigua and Barbuda recently made a monetary donation of over twelve thousand dollars ($12,000 E.C) to the membership of the Royal St. Vincent and The Grenadines Police Force (RSVGPF).

The financial donation was made to assist the officers of the RSVGPF who have been severely affected by the ongoing volcanic activity caused by the eruption of the La Soufriere Volcano on the Caribbean Island.

The eruption has unfortunately displaced many members and has created an additional burden on the officers of the Police Force as they strive to effectively safeguard the people of their country.

Assistant Commissioner of Police Desmond Dinard who is presently in St. Vincent assisting with security and humanitarian operations through the Regional Security System (RSS) framework presented the check with the above-mentioned amount to Commissioner of Police Colin John. Commissioner John in accepting the check thanked the Royal Police Force of Antigua and Barbuda for coming to the aid of the officers of the RSVGPF and gave assurances that the monies will be utilized as intended.

Commissioner Atlee P. Rodney expresses gratitude to the men and women of the RPFAB for coming to the assistance of their Caribbean neighbours during this time of adversity.

The Royal Police Force of Antigua and Barbuda has a strong Vincentian affiliation many of whom have families that have been affected by the ongoing volcanic activity.

They likewise were elated for the gesture of assistance for their fellow natives back home in St. Vincent and the Grenadines.