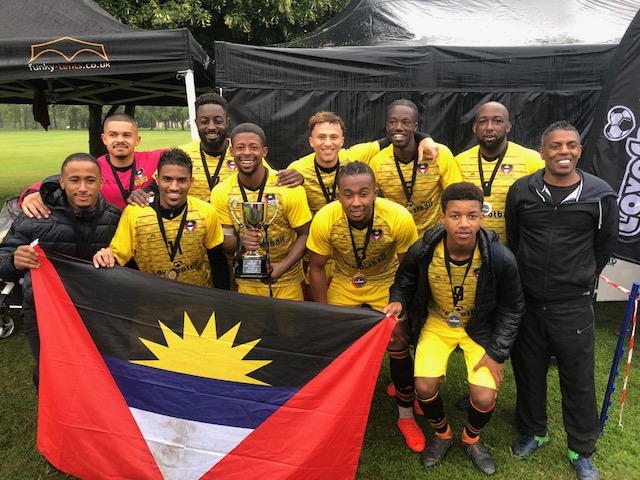 The Inner City World Cup launched in 1994 in the East End of London and was designed to
encourage multicultural grassroots players to represent their origins in the UK.

Despite torrential rain, 184 players from 16 countries representing Leicester-based
grassroots football teams turned out in a powerful show of togetherness and solidarity.
Antiqua & Barbuda eventually triumphed, beating Ghana 1-0 in the final ahead of the
weekend’s Leicester Caribbean Carnival.

The tournament has been running for 25 Years with over 30 tournaments and 85 countries
being represented in London, Liverpool, New York and now Leicester. Antigua and Barbuda
became the first Caribbean football team to win the tournament.

Learie Gonsalves who acted as team secretary said “that all the players live and where born
in the inner city and he felt that the taking part and winning the tournament has been a
huge and positive achievement as it gives a better balanced view of youth activity in the
Inner City. It has also provided a great sense of pride for the players of their heritage along
with the coming together of the Leicester Community’.

Learie also said “I would like to thank Event Founder Mark Abery for choosing to put the
event on in Leicester along with Leicester Nirvana FC for supporting the team under
Leicester and Rutland County FA rules for entering into a tournament and the respected
clubs (Listed below) for allowing the use of their players.

Mark Abery founder of the Inner City World Cup, an event growing across the UK, said:
“What a memorable day – we were privileged to have been able to bring The Inner City
World Cup to Leicester which showcased the city for the wonderfully warm and diverse
place it is.

“Already, we can’t wait until next year with more country teams, kids and womens’ football
and food stalls planned.”

Lord Willy Bach of the Leicestershire Police Crime Commission, who supported the event
with funding, said: “This is a fantastic event for Leicester celebrating diversity, community
spirit and the power of sport to unite people.

“We had wanted to support this event for a long time and to see it working so well with
everyone enjoying themselves is superb.

“I would like to congratulate Mark and the organisers of this event for their hard work and
vision. Sport not only builds bridges but it also gives young people the motivation to succeed
and develop their talents which is urgently needed to deter crime. We’re looking forward to
the Inner City World Cup becoming a permanent fixture in the event calendar in Leicester.”

Former Leicester City FC Captain Matt Elliot, who supported and helped launch the event,
added: “Well done to Antigua & Barbuda but more than the actual winners, The Inner City
World Cup has celebrated our community spirit and brought together everyone from all
different walks of life and so many nationalities centrally in Vicky Park – its brilliant.”

Former Leicester City FC and England Striker Emile Heskey said “It’s a wonderful set up
they’ve achieved with the Inner-City World Cup. I’m so proud that the country of my parents
heritage, Antigua and Barbuda won the first tournament held in Leicester. Keep up the good
work:”.

Current Southampton FC, Striker Che Adams also said “It’s great to see Antigua and Barbuda
win the Inner-City World Cup and nice to see two members of my family involved (Jorrin
John and Vince John)
Antigua and Barbuda High Commissioner Karen-Mae Hill extended congratulations to the
team and commended the organisers for bringing Antiguans and Barbudans in the diaspora
together.

“The Government of Antigua and Barbuda supports wholesome activities like this which
beyond the goal of winning, achieve their greatest success by bringing our community
together and projecting positive news about our shared identity and heritage as Antiguans
and Barbudans”