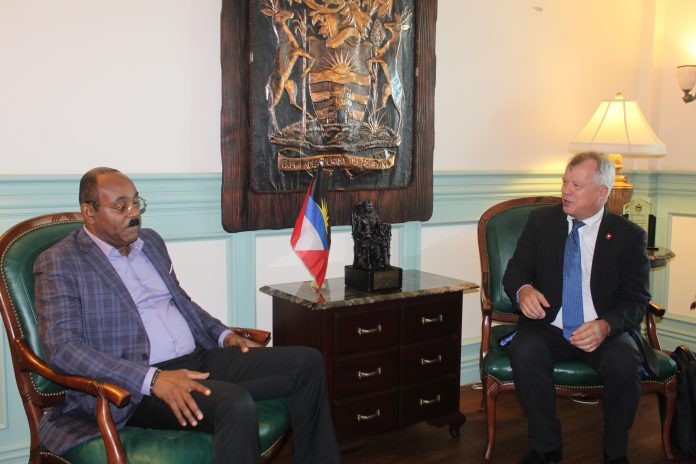 Prime Minister Gaston Browne welcomed Mr. Urs Schnider, Ambassador of the Swiss Confederation to Antigua and Barbuda. The Swiss Ambassador paid a courtesy call on PM Browne today at the Office of the Prime Minister on Queen Elizabeth Highway.

“Thank you very much for this courtesy call and your country, for providing the very generous assistance with establishing an embassy in Switzerland, it is certainly an offer that we intend to avail ourselves of”, PM said.

Antigua and Barbuda has appointed an Honorary Consul to Switzerland, however with the creation of an embassy, it is intended that deeper relations between both countries will flourish.

Switzerland was one of the first countries to formally recognize the political independence of Antigua and Barbuda in 1981. The two nations have maintained diplomatic and friendly relations since.

PM Browne thanked the Ambassador, and by large the Government and People of Switzerland for the offer of an embassy space.

“We need to strengthen our presence in Europe, we have had the practice of appointing honorary consuls, however that comes with some level of risk. There is no doubt that we need to have a presence in Switzerland but we do not have the finances to maintain an office there, so this gesture by your government is most appreciated. It will now help us to put a competent Antiguan there to represent us, our interest, in the World Trade Organization (WTO) and in Europe generally.”

PM Browne reiterated that this move signifies the stronger and deeper bilateral relations between the two countries.

Prime Minister Browne continued by declaring support for Switzerland’s Candidacy in the International Fora. “We know that you have a candidate for the Universal Postal Union, we are inclined to support you and you can expect the support of Antigua and Barbuda generally speaking, in the international fora,” PM Browne said.

In response, Ambassador Schnider thanked the Prime Minister for his warm welcome and support for Swiss Candidacy. The Ambassador also indicated that Switzerland maintains its offer to support Antigua and Barbuda in establishing a United Nations Mission in Geneva. “This will be essential in the first two years to come, we will provide office space, furniture and the like,” The Ambassador said. “Whenever you are ready we are ready,” Ambassador Schnider continued.

PM Browne thanked the Ambassador again for his commitment to strengthening the relations between Antigua and Barbuda and Switzerland and to expect continued support of the European nation moving forward.