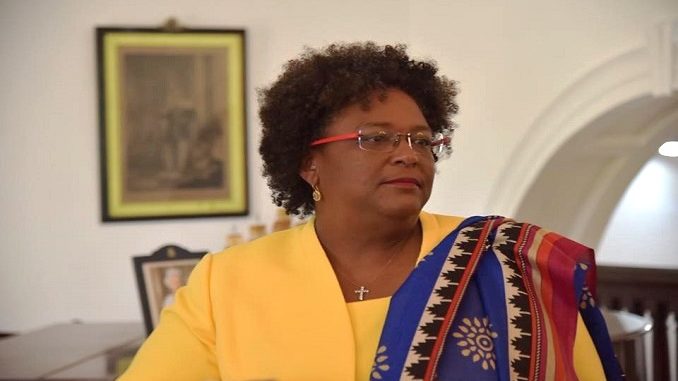 At least one regional leader is counting on newly elected Prime Minister Mia Mottley to advance the work programme of the “problematic” Caribbean Community (CARICOM) Single Market and Economy (CSME).

While welcoming her to office, Antigua and Barbuda prime minister Gaston Browne said that based on Mottley’s reputation he was confident she would be able to balance the demands of CARICOM and her “pressing domestic obligations”.

The CSME, which was started in 2006, promotes the free movement of goods, services, people, capital and technology within the 15-nation CARICOM grouping.

However, the pace of harmonization of tax systems, regulations and other governmental policies has been slow, especially following the financial crisis in 2008.

Addressing the 48th annual meeting of the Governors of the Caribbean Development Bank (CDB) in Grenada today, Browne noted that the Barbadian leader now had lead responsibility for the CSME within CARICOM’s quasi-cabinet.

“I am convinced that this noble project, which has encountered many difficulties and which will continue to be problematic, will be in constructive, practical and visionary hands in Prime Minister Mottley,” said Browne, as he pledged his country’s continued support.

“In welcoming her to our fold of Caribbean leaders, I do not do so simply because she is a woman. I do so because her reputation as a champion of Caribbean causes is renowned, as is her understanding of the value of the Caribbean’s unity in its global affairs,” he added.

He also highlighted his own recent victory at the polls in Antigua and Barbuda and that of Grenada’s prime minister Dr Keith Mitchell, saying those victories were a confirmation that their governments were “doing something right”.

He also suggested that other regional leaders would do well to emulate their style of “good participatory, inclusive and responsive governance” that “places the people at the centre”, and also emphasizes hard work, fairness and humility.

“Those are principles to which all governments should adhere. They are principles, which if ignored, will tumble the mightiest and punish the haughtiest,” the Antiguan leader said.

And while acknowledging that leaders have, and would make mistakes, he said one had to acknowledge and explain those mistakes, and implement measures so as not to repeat them.

He also said there could be no room for “arrogance and indifference”.

“That brings me to a double historic event in Barbados. Not only the election of its first woman prime minister, but also bestowing upon the party she leads an overwhelming mandate to raise up her country and restore it to the heights of economic accomplishment and social advancement with which it has always been associated.

“I join in offering Prime Minister Mia Mottley the profound congratulations of my government and the people of Antigua and Barbuda,” he said after suggesting last weekend that former Prime Minister Freundel Stuart had frustrated Barbadians, which had led to his crushing defeat  in the May 24 poll in which Mottley’s Barbados Labour Party claimed all 30 seats at stake.

Former CDB employee and newly installed Minister in the Ministry of Economic Affairs and Investment Marsha Caddle is attending the two-day meeting in St George’s on behalf of the Barbados Government.