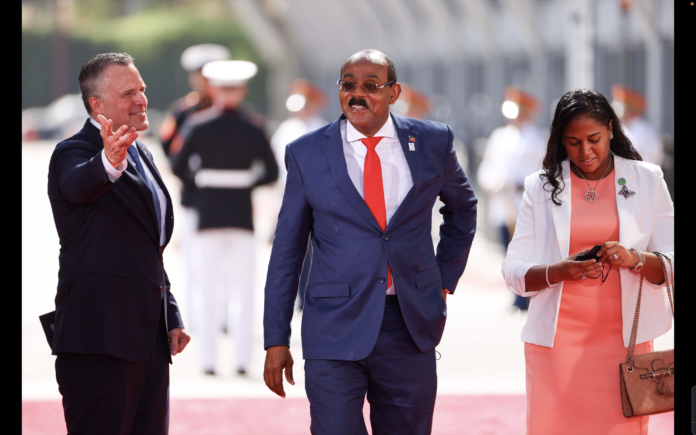 Prime Minister of Antigua and Barbuda Gaston Browne and his wife Maria Browne met US President Joe Biden and First Lady Jill Biden at the Microsoft Centre, Los Angeles, on Thursday. He also met the Vice President Kamala Harris on the second day of the summit.

The Antiguan Prime Minister and his wife are participating in the 9th Summit of the Americas. Many other CARICOM leaders are currently in Los Angeles, USA, attending the Summit.

The Summit will engage Hemisphere leaders in discussing pertinent issues such as building a sustainable and resilient future along with democracy, technology and pandemic resilience.

On Day 2 of the Summit of the Americas, Prime Minister Gaston Browne, along with CARICOM Heads, engaged with the United States Vice President Kamala Harris.

The robust multilateral discussions looked at several talking points such as US – CARICOM relations and opportunities to strengthen that partnership, Climate resilience and a proactive approach to combating the ongoing climate change crisis on a regional level.

Notably, Gaston Browne had earlier refused to attend the Summit because the federal government of the United States denied the participation of Cuba and Venezuela. However, later, US Senator Christopher Dodd convinced Browne to participate in the Summit.

The Caribbean leaders participating in the Summit promised to take advantage of the chance to defend the region’s position.