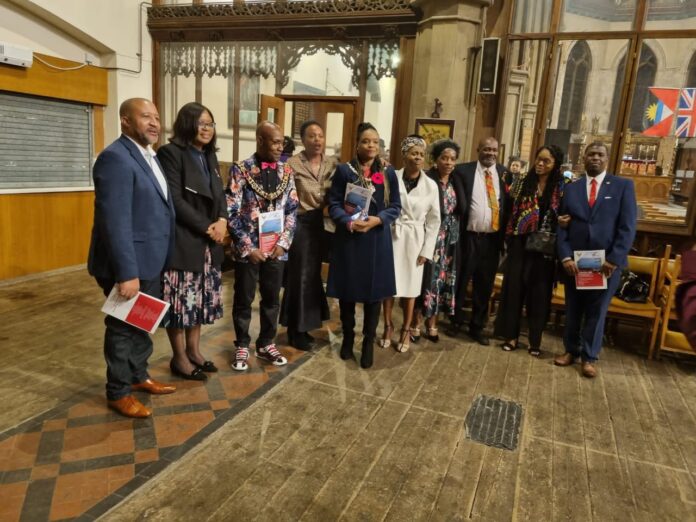 Antigua and Barbuda’s 41st anniversary of independence was celebrated in Leicester at a thanksgiving service held at the St. Peter’s Anglican Church.

Scores of Antiguan and Barbudan citizens living in Leicester and surrounding areas attended the church service to celebrate the country’s independence.

The service is an initiative developed by the diaspora group, Wadadli Link, led by Sharon Frederick.

It has enjoyed the support of the High Commission since it was first held in 2017 and is now an annual event in the diaspora calendar around Independence.

This year the ceremony focused on the Independence theme of unity, strength and stability.

In her message, Antigua and Barbuda’s High Commissioner, Her Excellency Karen-Mae Hill told the audience that Antigua and Barbuda, despite the challenges it has faced in its relative youthfulness as an independent democracy, has achieved much for which we can give thanks.

She acknowledged the role of the Diaspora in nation building and thanked them for their contributions to the development of Antigua and Barbuda.

“Let’s now ensure that your children and their children share the connection we as adults feel to the land of our heritage. Creating avenues for our youth to develop this sense of identity and belonging is critical at all times, but especially in the conflicted world we now live in. I commend the example being shown by Wadadli Link whose executive and planning committee spans all generations,” the High Commissioner said.

This theme was repeated by Pastor Marvin Hector in his sermon and by President of Wadadli Link, Sharon Frederick.

Many Antiguans and Barbudan’s living abroad still feel very patriotic about their homeland of Antigua and Barbuda and wish to remain connected in some way to it despite residing abroad.

This was the inspiration behind Wadadli link which was formed by a group of likeminded individuals who wanted to bring together members, family, friends and the wider community for the benefit of Antiguans and Barbudans living in Leicester and the UK to celebrate and promote our shared heritage and culture.

The Lord Mayor Councillor George Cole, the first black Lord Mayor of Leicester, and Mrs Cole attended the service. Deputy Lieutenant of Leicester, Professor Ivan Browne, a distinguished member of the Antiguan and Barbudan UK diaspora, was also in attendance.