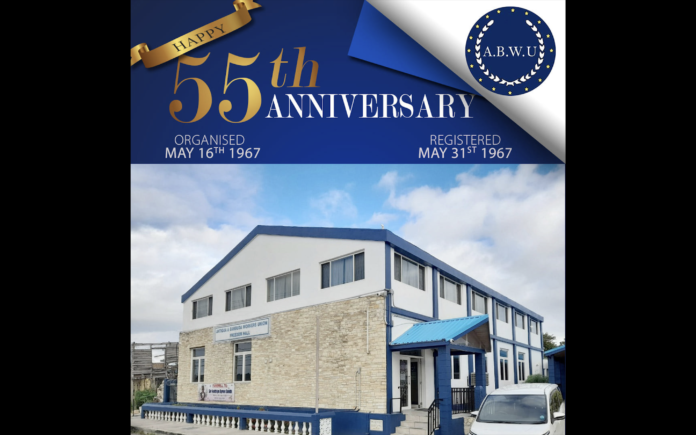 The Antigua and Barbuda Workers’ Union has reached another important milestone in its struggle to elevate the lives of workers in Antigua and Barbuda. On May 15, the ABWU will commence its 55th anniversary celebrations which will run through May 31.

The theme for this year’s anniversary celebrations is “Uniting Workers with a Renewed Vision”. The theme underscores the principle of “strength in numbers” and highlights the Union’s intention to provide strong and decisive leadership that is responsive to the needs and circumstances of the current times.

Their work, along with the efforts of many ordinary men and women – employed primarily as dock and hotel workers – secured many of the rights and benefits that we enjoy today.

The Social Security Scheme, paid maternity leave, severance pay and a shortened work week were the result of the ABWU’s influence on the government’s legislative agenda.

The schedule of events for the ABWU’s 55th Anniversary are as follows:

The Antigua and Barbuda Workers’ Union is delighted to celebrate this occasion with its members and well-wishers. The Union’s positive impact on labour relations in Antigua and Barbuda is the result of a united membership, a talented team of officers and support staff, along with a committed and hard-working executive body.