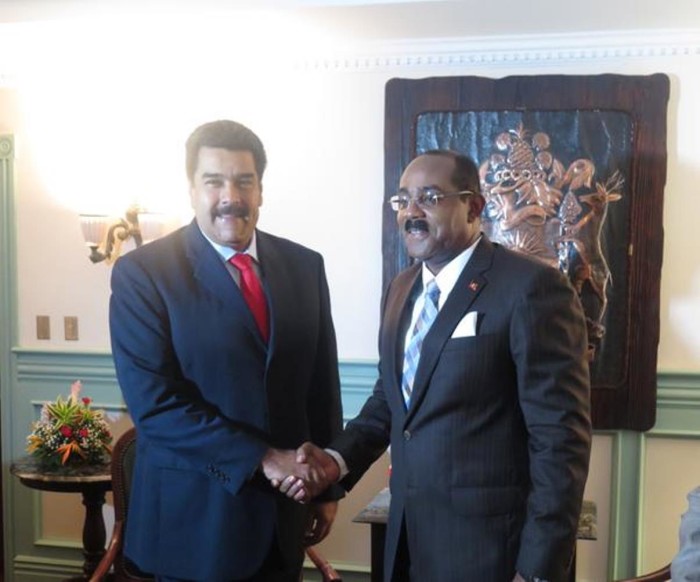 The Government of Antigua and Barbuda says it has reiterated solidary with Government and People of Venezuela after Prime Minister Gaston Browne held bilateral and diplomatic talks with his South American ally.

In a statement Wednesday, the government said  that the meeting was held “as a part of Venezuela’s Foreign Ministry tour of countries across the region.”

Venezuela Foreign Minister, Chancellor Jorge Arreaza, along with his diplomatic team including Resident Ambassador Carlos Perez, met with Browne; the Minister of Foreign Affairs Chet Greene; and other officials in the Office of the Prime Minister.

Browne used the opportunity to highlight ways in which Antigua and Barbuda and Venezuela could strengthen and deepen their cooperation and diplomatic ties, along with possible projects for collaborative implementation, according to the Antigua and Barbuda Government statement.

In response, Chancellor Arreaza, said “The Prime Minister of Antigua and Barbuda Gaston Browne is a brother of Venezuela and a friend to the people who seek their freedom on the continent and in the world.

“We have been reviewing the bilateral relationship, of course with a view to the future – new cooperation projects and new plans,” he added. “We are looking for new ideas for Petrocaribe [oil agreement].”

Although the main focus of the meeting was to find ways of strengthening the relationship between the two countries, “Chancellor Arreaza probed the common OECS [Organization of Eastern Caribbean States] position relating to their foreign policy, especially Venezuela,” the statement said.

At the recently held 65th meeting of OECS Authority, the communique noted that “The Authority viewed with alarm the damage that was being caused to the economies of Member States as a result of the sanctions imposed on Venezuela.”

The communique reiterated the need for more dialogue with Venezuela to find a resolution, “and PM Browne echoed this call,” the statement said.

It said Chancellor Arreaza thanked the Browne administration for its vocal diplomatic support of the Venezuelan government.

The Foreign Minister expressed his government’s gratitude for the position Antigua and Barbuda took in April during the OAS Summit in Peru by withdrawing from the meeting on principle, the statement said.

It said Browne, in return, thanked the Venezuelan government for their support of his administration as well.

Browne also expressed his gratitude for the PetroCaribe debt reduction by 50 percent.

In addition, the Antiguan leader thanked the people of Venezuela for being one of the first countries to respond to the crisis Antigua and Barbuda faced after the devastation of Hurricane Irma in September 2017.

During the high-level talks on Tuesday, Venezuela also pledged to assist in the cost to rebuild Barbuda, the statement said.

It said the meeting included a number of other pertinent issues such as Antigua and Barbuda’s Inclusion in the ALBA Bank.

Browne also recommend that ALBA considers the use of Cryptocurrency as opposed to trading in national currencies.

The Venezuelan Foreign Minister said: “We are very happy to have met, and to give a message from President Nicolas Maduro for their support of Venezuela, which in the midst of so many aggression, is always close with their brothers and sisters of ALBA and the Caribbean.”