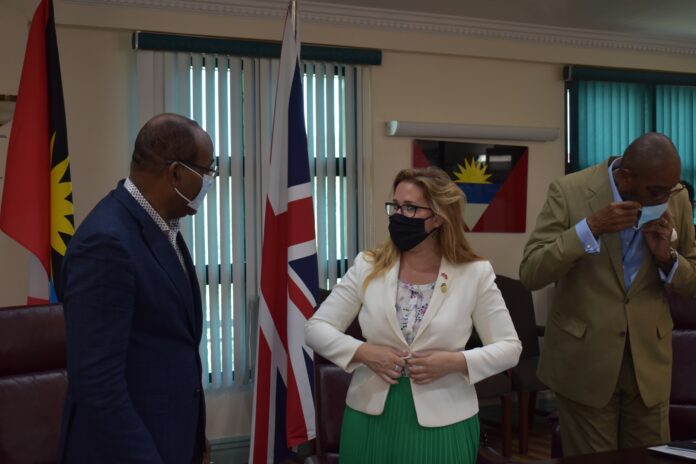 The agreement establishes a maritime boundary between Antigua and Barbuda and the United Kingdom in respect of Anguilla. Tuesday’s signing represents the culmination of work that was started in 2017 and resulted in two rounds of physical negotiations.

During the signing ceremony, Prime Minister Browne said, “Antigua and Barbuda takes another key step in realizing this potential. When we establish the outer limits of our maritime space, we can develop and implement methods for the utilization of the space to its full economic potential. With Tuesday’s signing, Antigua and Barbuda has delimited three of five maritime boundaries. Having first started this process of establishing boundaries in the 1980s, we have made tremendous progress within the last few years. To date, we have signed an agreement with the French Republic in respect of Guadeloupe and St. Barthelemy and this week, with the UK in respect of Anguilla. With this agreement, we have completed more than 75% of the total length of the boundaries to be delimited.”

Prime Minister Browne went on to explain that what remains to be delimited are the boundaries with Montserrat and St. Kitts and Nevis which he looks forward to the commencement of negotiations with the UK in order to delimit the boundary with Montserrat.

“My Government is committed to ensuring that the outstanding boundaries are completed in the shortest possible time in order to position Antigua and Barbuda to continue to lead within the OECS on the development and implementation of the blue economy and blue growth,” PM Browne said.

Ambassador Dwight Gardiner, Director/ Registrar General of the Antigua and Barbuda Department of Marine Services (ADOMS), who leads the technical negations and who chaired the Maritime Boundary Signing ceremony on Tuesday, explained the importance of such an agreement.

“Mindful of the role that the oceans play in our daily lives, including providing food, transporting goods, and serving as a source of recreation, the signing of maritime boundary delimitation agreements between opposite or adjacent states is of crucial importance in the establishment of the outer limits of the state’s jurisdiction. Cognizant of the significant potential for growth and development, through the establishment of a Blue Economy, the identification, utilization, exploration, and exploitation of the ocean’s potential can then be realized.”

Ambassador Gardiner continued by expressing how pleased he is that Antigua and Barbuda has made significant progress in the process of maritime boundary delimitation.

Ms. Thompson noted the importance of the Maritime agreement, especially in light of continued dialogue addressing issues that threaten the ocean’s role in supporting all life.

“As parties to the UN Convention on the Law of the Sea, the UK and Antigua and Barbuda are joined in the common endeavor of upholding the Convention in all its dimensions, as an essential enabler of global prosperity, security and a healthy planet. And agreeing on maritime boundaries contributes to good neighborly relations and international peace and security and enables countries to work together to conserve and sustainably manage our shared global ocean,” Thompson remarked.

The UK Resident British Commissioner indicated that the UK looks forward to continuing the excellent relationship with Antigua and Barbuda as the nation’s move to consider other outstanding maritime delimitation issues.

Also present during the signing ceremony, virtually, was The Honourable Dr. Ellis Webster, Premier of Anguilla. His Excellency gave brief remarks expressing the importance of Tuesday’s signing, finalizing years of technical and diplomatic work on the maritime agreement.

Minister with responsibilities of the Blue Economy, the Hon. Dean Jonas and Senior Advisor to the Prime Minister, Ambassador Colin Murdoch were also present at Tuesday’s ceremony.