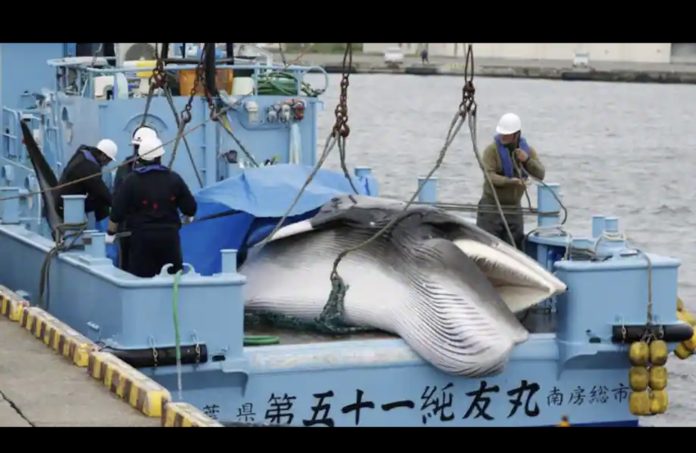 A resolution submitted by pro-whaling countries including Antigua and Barbuda has sought to reopen a formal debate on commercial whaling.

The 40-year ban could be overturned after the proposal was submitted at the International Whaling Commission (IWC) meeting in Portorož, Slovenia.

The 88 member countries are expected to take a vote on Tuesday on the said resolution.

This comes after the country has also co-sponsored a resolution with Cambodia, Guinea and the Gambia which argues how fishing practices could contribute to food security and address poverty, said a report by the Guardian.

The report also mentions wildlife protection organisations like OceanCare and HumaneSociety have said that these resolutions threaten the progress made by the IWC.

The OceanCare director of international relations, Nicolas Entrup, has dismissed the idea of “sustainable whaling” calling it “ridiculous”.

“Instead of losing precious time with decade-old debates about fabricated scenarios like ‘sustainable whaling’ and false solutions to food security, the IWC should urgently take up the real pressing issues: climate change and plastic pollution,” said Entrup. According to the media report, commercial whaling in the 19th and 20th centuries had nearly brought the mammals to the brink of extinction.

“People assume the whaling ban, which has saved the lives of hundreds and thousands of cetaceans, is done and dusted. But the ban is in jeopardy as long as there are nations in the IWC who will vote to return to whaling,” said Wendy Higgins, director of international media at Humane Society International.

This comes four years after a similar proposal of lifting the ban on commercial whaling by Japan was rejected by the IWC. Tokyo at the time had also said how whaling could be done sustainably.

At the time, IWC reportedly reiterated its role as a conservation-focused organisation and said that the threats to whales are not just limited to hunting but also include ship strikes, climate crisis and fishing bycatch.

Subsequently, Japan left the IWC and started commercial whaling again since it was no longer bound to comply with its restrictions.

This comes amid the IWC facing financial difficulties following Japan’s exit, the Covid pandemic, and the Global economic crisis, said the report.

At least a quarter of the 88 member countries have not paid their annual dues.

On Monday, the commission also altered the rules that ban countries in arrears from voting acknowledging how the pandemic has disproportionately affected developing countries.