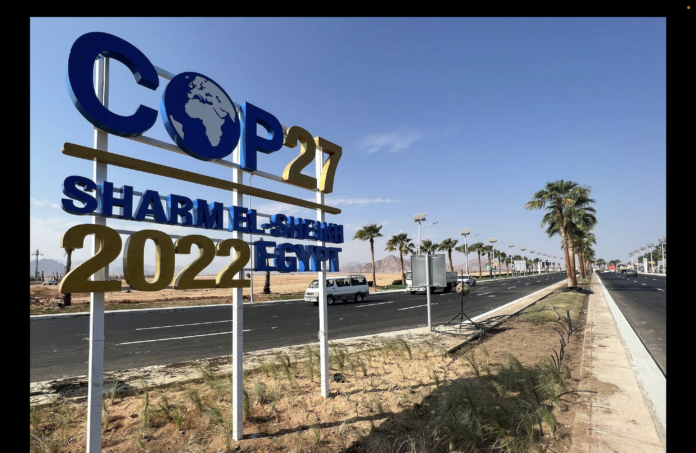 This global conference on climate change is being held in Sharm El Sheikh, Egypt.

The national delegation is participating in the climate change negotiation process and delivering presentations on Antigua and Barbuda’s experiences implementing climate actions.

Leading the delegation is the Minister of Environment, the Hon. Sir Molwyn Joseph along with Ambassador Diann Black-Layne, Ambassador for Climate Change and Director of the Department of the Environment.

The team is focusing on providing technical guidance to the various international funds and supporting the implementation of the United Nations Framework Convention on Climate Change (UNFCCC).

Sir Molwyn arrived at COP-27 in Egypt on Nov. 13th. Other members of the national delegation arrived in Sharm El Sheikh on 31st Oct. to participate in pre-sessionals and have begun sharing on Antigua and Barbuda’s perspectives in implementing climate change projects and programmes at several conference events.

The work of the national delegation in Egypt is in addition to Antigua and Barbuda’s responsibilities as the Chair of the Alliance of Small Island States (AOSIS).

In that capacity, the country is advocating on behalf of over 43 small Island states, which are vulnerable to the negative impacts of climate change.

“The national delegation is presenting on the country’s capacity to move towards the targets of the convention and determine how the country can benefit its people in the process,” said Ambassador Black-Layne.  “The team will support the Minister and the AOSIS team.”

While at this COP, delegates are seeking to get agreement on the formation of a Fund to provide compensation to small island developing states for losses and damages incurred due to climate related disasters.

Antigua and Barbuda is also seeking to enhance its working relationships with the various funding institutions such as the Green Climate Fund (GCF), the Adaptation Fund (AF) and the Global Environmental Facility (GEF).