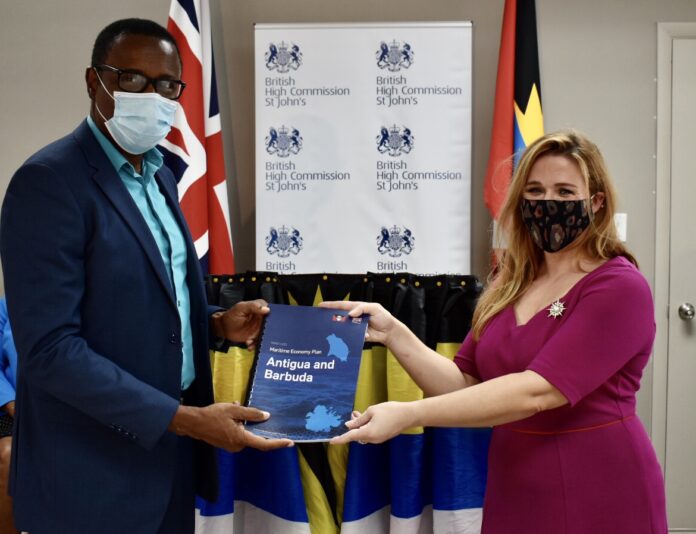 Today, a landmark document, Antigua and Barbuda’s Maritime Economy Plan, was launched
in a joint ceremony by the Governments of Antigua and Barbuda and the United Kingdom.
The launch signals a greater focus towards the blue economy to stimulate national
development and protect one of the country’s most valuable ecosystem.

Since the initial request from Foreign Minister E.P. Chet Greene, over the last two years, the team from the UK-funded Commonwealth Marine Economies (CME) Programme has been working closely with Hon. Dean Jonas, Minister of Social Transformation and the Blue
Economy, Antigua and Barbuda’s High Commissioner to the UK, H.E. Karen-Mae Hill, and Ms Kimbalie Constant, Strategic, Operations and Project Implementation Manager in Minister Jonas’s team to bring the Programme to life.

The work of the UK and the CME Programme is part of its continuing commitment to helping vulnerable Small Island Developing States to mitigate the risks and leverage the opportunities of having access to vast ocean resources.

Lord (Tariq) Ahmad of Wimbledon, UK Minister of State for the Commonwealth and Minister
responsible for the Caribbean, gave remarks virtually at the ceremony. He said, “I am very
pleased to help launch this very first [Maritime Economy] Plan for Antigua and Barbuda.”

He further said, “The development of this national plan, together with scientific data-gathering and technical assistance from the Commonwealth Marine Economies Programme, forms the foundation of a successful, climate-resilient, ocean-based economy. It is one of a range of resilience-building interventions that the UK supports through our regional development programme.” 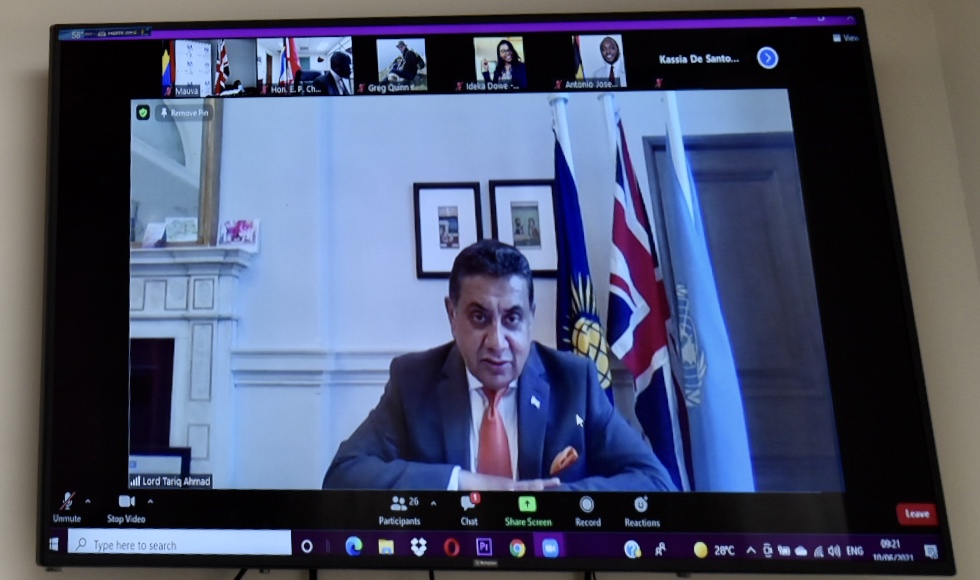 The UK Minister noted the toll the pandemic has taken on all the world’s economies but
especially those that depend on tourism. He said “This reinforces the need for solutions like
these that underpin economic prosperity at the same time as safeguarding the health of the ocean.”

Antigua and Barbuda’s move to have such a Plan fits well into its agenda of prioritising the
development of its Blue Economy. Minister Jonas said “the Maritime Economy is the step in the right direction, not just for the Ministry of Social Transformation and the Blue Economy,
but also for the nation of Antigua and Barbuda as we forge forward with the development in this emerging sector to fuel new economic activities and support industries within our
communities. This plan puts us on track with our long-term sustainable development goals
while creating employment and economic growth within our twin island.

He expressed gratitude to the UK Government for following through on the commitment made in 2018 at the Commonwealth Heads of Government meeting to help vulnerable states protect the health of their oceans and promote the growth of blue economies. This continues to demonstrate the strong partnership that exists between Antigua and Barbuda and the UK.

The implementation of this Plan will be a critical next step in creating sustainable and long-
term use of Antigua and Barbuda’s marine area, especially at a time when the economy has been hard hit by the pandemic. This sophisticated plan-led approach to blue development
recognises the inextricable link between the people, their cultures, and the marine
environment.

For many the ocean provides the lifeblood of their existence and careful
development and stewardship over it is important.
The ceremony ended with Resident British Commissioner, Ms Lindsy Thompson, presenting
copies of the plan to Hon. Dean Jonas, Minister of Social Transformation and the Blue
Economy, as well as Ms Sandra Joseph and Mrs Joan Moses-Carrott, Permanent Secretaries
in the Ministry of Social Transformation and the Blue Economy.