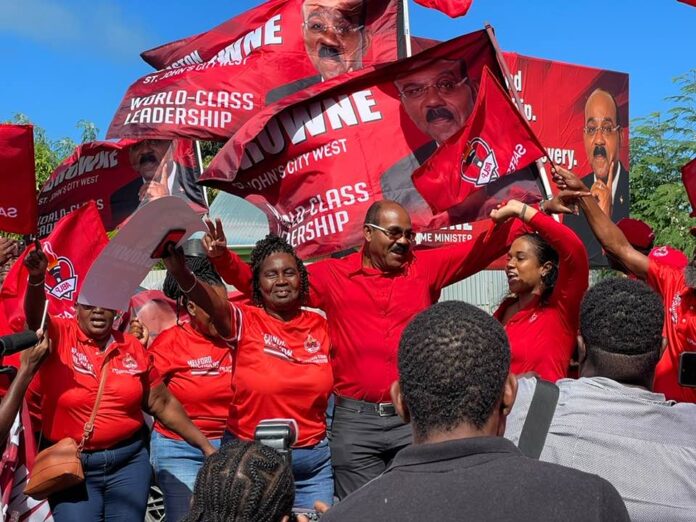 The manifesto informed that a housing revolution is taking place in Antigua and Barbuda. As per the document released by the political party, in both countries, thousands of houses have been constructed over the last eight (8) years. The construction and development have been done by the government, private sector companies, along with private individuals.

According to the manifesto, ABLP has performed the following:

National Housing and CHAPA have delivered more than one thousand homes. Along with this, 125 more homes are under construction. The government will invest in a Structural Integrated Panel System (SIPS) home to increase the construction and delivery of homes, along with an increase in the construction of two-bedroom starter homes for USD 125,000.

Climate-resilient homes in Barbuda, Point and Jennings will be constructed utilizing a grant of EC$90 million from the People’s Republic of China. These homes will have a rent-to-own option.

The ABLP administration will enhance its urban renewal program to include improving the aesthetics of the Central Business District and improving the housing stock in neighbouring communities, including Point, Villa, Grays Farm, Green Bay, Ottos, and Perry Bay, by operationalizing the Improvement Loan Programme in early 2023.

While mentioning about Beautification of Antigua, manifesto informed that Barbuda is not mentioned in this section because an entire Chapter of this Manifesto is devoted to the transformation of Barbuda, which is presently in process, making it a luxury world destination. The beautification of Antigua’s interior, its Capital City and its towns have been hindered by perennial drought conditions.

It furthermore claimed that contributing to making the streets and highways appear unkempt and untidy are the numerous persons who litter by dropping their left-over bottles, paper utensils, and other material on the roadways in violation of litter laws and guidelines for disposing of garbage. Next-level development requires the beautification of Antigua for the enjoyment of its people, the enhancement of tourism, and the general appearance of the island.

In this regard, the manifesto stated that the ABLP government would implement the following measures to strengthen legislation for enforcing litter laws, including stiffening the monetary penalties and empowering police and police and special constables to charge and ticket violators caught littering: the same will apply to persons who dump their garbage in places other than designated garbage dumps.

“One million trees and flower plants will be made available annually for planting. Highways will be identified for tree and flower plants, and, in return for advertising and name association, private sector companies will be invited to pay for their own contracted teams to maintain the stretches of highways and round-about that they choose. Additionally, Public Works Department will maintain persons to maintain and nurture plants and trees on roads and highways, which they will be assigned to keep clean and attractive,” the document informed the general public.

It added that an inter-Island school competition at separate primary and secondary levels would be started under which schools will vie for the best “Inter-School Trophy” for their contribution to growing plants and flowers and nurturing them within a one-mile radius of their school location.

The manifesto further mentioned that prisoners who have not been confined for grievous crimes would also be required as part of the sentences to give supervised community service by contributing to the island beautification process. Existing laws requiring unused land to be kept free of bush, weeds, and other growth, will be strengthened and implemented, and owners will be fired for allowing overgrowth on their land and for any intrusion on public roads and pathways and on neighbouring property. Public works will clear such land should owners continue to neglect to clean them, and charges will apply.

The Village competition will also be revitalized and re-energized to restore the pride that villagers had in their communities and their keenness to profile the attractiveness of their surroundings. Service organizations, such as Lions and Rotary, will be invited to partner with the Ministry of Agriculture and the Development Control and Environmental authorities to recommend and organize ways in which the beautification of Antigua and Barbuda can be made continuous and sustainable.

It also mentioned that the beautification of Antigua is very important to a sense of pride and dignity as a people. Previous generations worked in our homeland to make it stand of pride as well as dignity that Next Level development seeks to achieve.