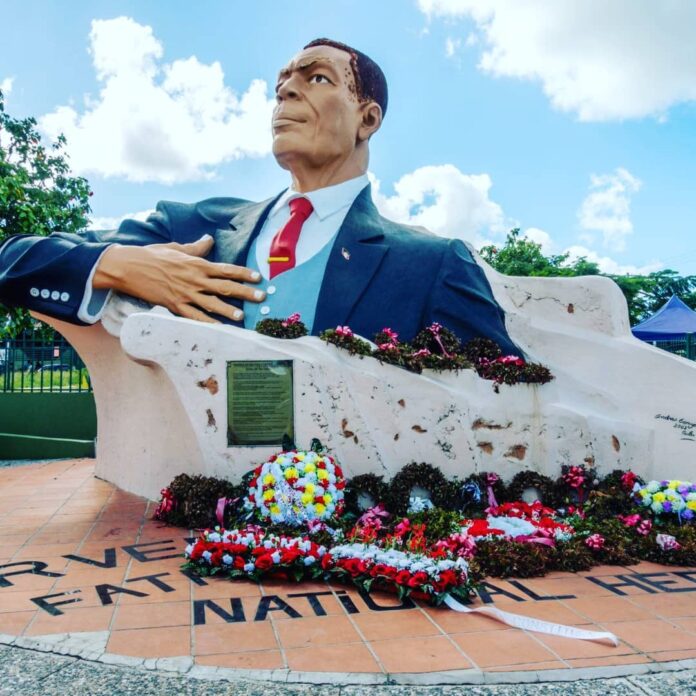 Happy Birthday to the father of our great nation, Sir Vere Cornwall Bird. Today we commemorate him by celebrating his life and legacy with the V.C. Bird National Holiday and Wreath Laying Ceremony.

Like so many of the great leaders of his time , Sir Alexander Bustamante, Norman Manley, Sir Grantley Adams and Robert Bradshaw to name a few – Vere Cornwall Bird’s political career was fashioned and nurtured in the struggle of the working people of his country for better conditions and ultimately for greater self-respect through political action.

In 1940, Vere Cornwall Bird became a founder member of the Antigua Trades and Labour Union. He was elected the Union’s President in 1943 and remained its leader and mentor until 1973.

During that period, the AT&LU, under his dynamic leadership, secured recognition as the bargaining agent for the workers and lists among its many achievements the abolition of child labour; the promotion of the interests of small farmers through the establishment of a Peasant Development Office; better working conditions including holidays with pay; and retirement benefits in the form of gratuities and pensions.

VC Bird’s concern for workers’ rights led inevitably to his active participation in the constitutional reform process that would lead to self-determination through universal adult suffrage, internal self government, and eventually to Independence. In 1946, with widespread support from among the working people, Mr. Bird was elected to the Antigua Legislative Council and campaigned relentlessly for the empowerment of the people through universal adult suffrage.

In 1961, when the Ministerial system of government was introduced, Mr. Bird became Antigua’s first Chief Minister and in 1967 became Premier of Antigua when it advanced to become a State in Association with Britain.

In 1981, he capped this remarkable career when he became the first Prime Minister of an independent Antigua and Barbuda – an illustrious career.

Advertise with the mоѕt vіѕіtеd nеwѕ ѕіtе іn Antigua!
We offer fully customizable and flexible digital marketing packages. Your content is delivered instantly to thousands of users in Antigua and abroad!
Contact us at antiguanews[email protected]