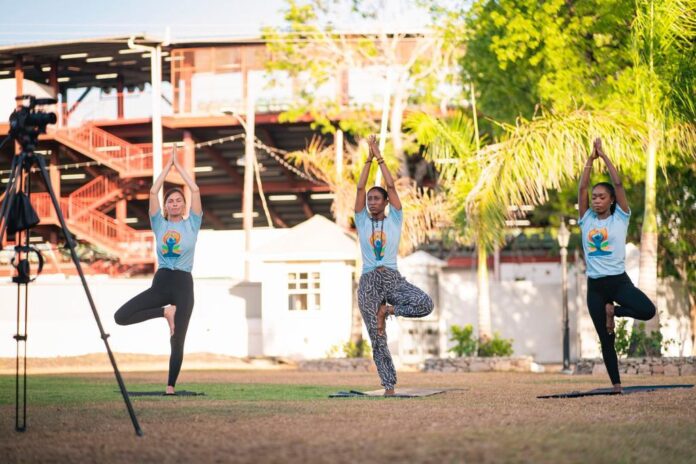 Foreign Minister Hon. Chet Greene was the Chief Guest at the event. Mrs. Paula Frederick-Hunte, Permanent Secretary in the Office of the Governor General delivered remarks on behalf of the Governor General H.E. GGD Sir Clar Roberts, appreciated the positive and healing effects of Yoga and the continued efforts of the High Commission of India to hold regular events to promote and propagate Yoga. She underlined the interest in spread of Yoga at the highest level in Antigua & Barbuda and how it was being introduced at school level.

The Foreign Minister also informed the decision of the Government of Antigua & Barbuda for introduction of Yoga in four more school in the upcoming academic session.

Video message on Yoga from the High Commissioner Dr. KJ Srinivasa,was played in which hedetailed the various Yoga events being conducted in India and across the world by the Government of India and Indian Embassies abroad, including the primary event being led by Hon. Prime Minister Shri Narendra Modi at Mysore to celebrate the 8th IDY 2022.

He also informed the audience on the unique Yoga events in 75 heritage locations, and 100 cities to celebrate the 75 years of Independence of India under the ‘Azadi Ka Amrit Mahotsav’. Dr. Srinivasa also gave out details of India’s ‘Guardian Ring’ Yoga project on the 21 June wherein Yoga sessions from all over the world – from Japan in the East to US in the West will be live telecast.

The High Commissioner especially thanked the Government of Antigua & Barbuda for introduction of Yoga in school curriculum as the High Commission strongly wanted the inclusion of youth in the Yoga programme so that they can benefit from this traditional Indian science of well-being from an early stage.

This was followed by performance of Asanas based on Common Yoga Protocol by all the invitees present at the event under the guidance of the lead yoga instructors Ms. Charlotte Drew and ten other Yoga instructors and by presentation ceremony by Honorary Consul of India to Antigua & Barbuda Mr. Vijay Tewani. The event was in association with a number of schools, Lions Club and Rotary Club of Antigua & Barbuda.

Yoga, an intrinsic part of Indian tradition and culture for holistic living, has transcended the barrier of race, religion and culture to become a global health movement. Yoga is essentially a mental and physical discipline based on an extremely subtle science which focuses on bringing harmony between mind and body.

It has been the endeavour of the Government of India under the leadership of Hon’ble Prime Minister Mr. Narendra Modi to promote and propagate Yoga globally so that the whole world could benefit from this traditional Indian science of mental and physical well-being.

Towards this end, due to Government of India efforts United Nations General Assembly adopted a resolution sponsored by 177 member nations out of the total 193 members of the UNGA to unanimously proclaim 21st June, the longest day in the northern-hemisphere, as the International Day of Yoga.