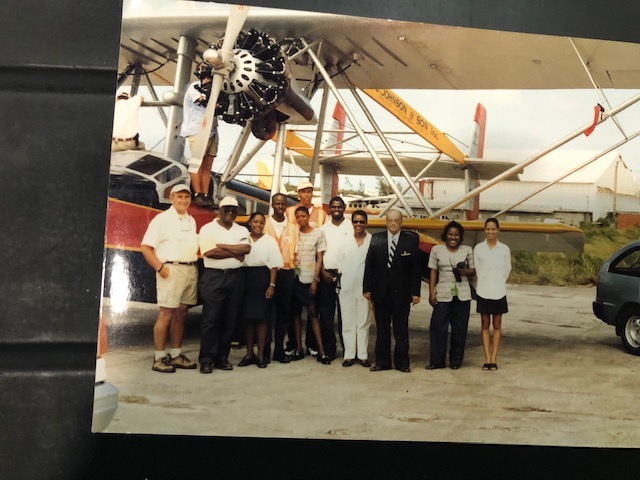 Below is a replica of one of the first airplanes which introduced Antigua to aviation when Johnson and Johnson (originally Johnson & Son Inc.) in 1935 decided to commission a special Sikorsky aircraft to fly from America to Brazil to locate a specific plant for its pharmaceutical inventory.

In 1998 J&J decided to build the prototype shown and retrace the route in celebration of their exploration. Below is the then 9 year old Ports Services Ltd. the aircraft handler, and Mr. Frank St. Hilaire, who was the Trinidad & Tobago operator who welcomed the original aircraft as it tech-stopped in T&T en route to Brazil.

Soon after,  the Mill Reef home owners persuaded Panam to place Antigua on their Southern route,  and thus began Antigua’s thrust into Aviation as the top of the line airlines realized Antigua was an important destination and tech-stop in the Caribbean. BOAC  (now BA) from England came next, and down the years Antigua welcomed airline carriers from the U.S., Europe, South America, and Military Aircraft of all sizes from US, accommodating even the biggest airfreight carrier from Russia.

As a consequence Antigua over the years has grown an enormous segment of aviation and airline-trained personnel who have filtered into the hospitality sector, other business development and into the entrepreneurial field. These persons,  increased phenomenally by LIAT based in Antigua,  all whom are extremely knowledgeable on the key principles of Aviation, have achieved compliance affirmation re the three imperatives of Rules, Regulations and Transparency, as dictated by International Air Transport Association (IATA) and the International Civil Aviation Authority (ICAO.)

With a working population of 60,000 plus (?) it follows that Antigua can boast of one of the largest per capita aviation intelligence in the region.

It therefore is no surprise that Antiguans by and large have expressed alarm at the strange aviation proposition of a Trans-Atlantic airline which expects to lift off within a three month timeframe.

Further, the absence of any knowledgeable persons at the signing of such important documents, opens the conversation to questioning of the absent Permanent Secretary, Aviation, the Coordinator (ICAO), the Aviation Advisor to the Minister, or even a spectator from ECCAA. The Minister of Aviation was noticeably absent.

Whereas the Government is at pains to encourage Antiguans to ‘stop negative talk’ regarding the Nigerian aviation investor and his Antigua Airways, Antiguans are knowledgeable that Aviation is the second most dangerous business enterprise in the world, after space travel, and respect the fact that there is no overhaul capacity in airspace.