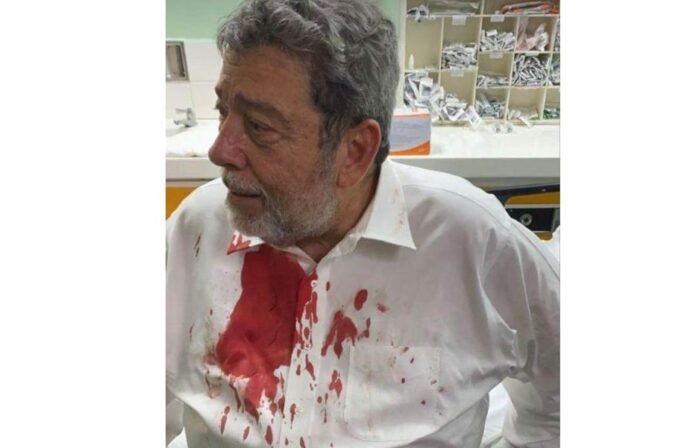 When I read Reuters’ report of this tragic attempt on the life of the Vincentian Prime minister,  I was stunned by the negative global effect which this act of brutishness could have on our civilization and our leaders’ attempt to combat the COVID pandemic.

Those: Politicians, union leaders and media activists,  who are fueling the anti-vaccination campaign, should use the apparent,  attempted assassination of The Right Hon, Ralph Gonsalves )Prime Minister of St Vincent and the Grenadines) as a harsh reminder that, they have the right to  lawful speech, not freedom to inspire  criminal violence.  Indeed, some may well argue that certain  leaders of the Anti-vaccination campaign,  should examine  the palm of their hands,  for blood stains from this murderous attempt,  to assassinate the dean of Caribbean Prime Ministers

Anti-vaxxer: politicians, union leaders and media activists, should  not  be  too naive to know that some  of their followers may  be  people with low IQ and or mental or emotional conditions,  which limit their  thinking and related cognitive skills.

Some may  wonder if  they are aware of  that, and are cynically,  herding their loyal supporters  toward the kind of action unleashed against the Right Hon, Ralph Gonsalves, in a selfish grasp  at  political advantage?

And why was this savage attack performed against the life of Prime Minister Gonsalves? Perhaps, because he is leading the effort to have (at least) frontline workers in his country,  vaccinated against the COVID  virus. A pandemic condition which is killing millions of people around the World including, in St Vincent, The Grenadines and the rest of the Caribbean.

For that, almost any Caribbean head of Government could be the assassin’s next target.

Strangely, the actions of the anti-vaxxer: Politicians, union leaders and media activists, suggest  they  are not aware that  if COVID kills their unvaccinated supporters, they die with their: Votes, union dues and media support.

Perhaps, the worst insult to injury, is the fact that many of those who are leading or inspiring the anti-vaccination campaign, may  (themselves) be  fully vaccinated, and protected  against  serious illness and death from COVID or its family of diseases. Yet they boldly discourage public policies designed to give   their followers the same   protection from the virus — Strange, indeed?

I expect that Prime Minister Gonsalves (being the outstanding statesman) will avoid utterances, which will imply recrimination. Rather, “let the law take its course”.

In the meantime, Caribbean leaders must double-down on efforts to save our civilization from this dangerous and deadly COVID virus.

As is the case with the recent assassination  of the President of Haiti, the security gaps which allow such a crude and medieval head  injury to  a  Prime Minister,   suggests real weaknesses in the  protective  detail of the Vincentian leader.

The assassination of the President of Haiti, killed Caribbean democratic  innocence; The  (more recent) attempted assassination of Prime Minister Ralph Gonsalves, buried it. Furthermore, both murderous acts are loud calls for enhanced security for our national and regional leaders. Walk good until next time.