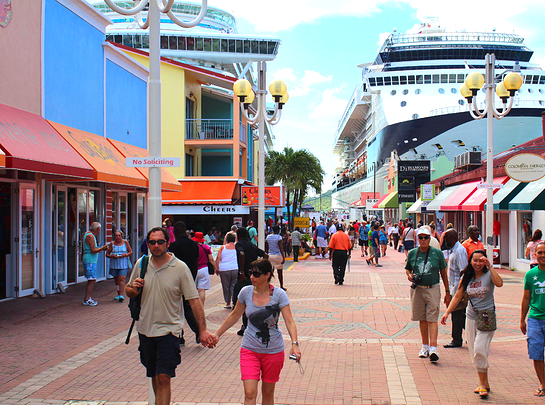 Vendors had to be relocated after a foul smell emanated in the area causing vendors to fall sick.

Stuart said he visited the location twice this week (Sunday and Wednesday) and observed the effects the foul odour had on visiting cruise ship passengers.

“This relocation, albeit for three weeks, will do or has already done tremendous damage to the cruise tourism product.

“Those visitors while I was there, I saw them holding their nose, some of them walking like they can’t walk because the stones there are so hard, feces smelling , the place is like a dirty shanty town, or a shanty town-like mall,” Stu art said.

The former executive director referred to Heritage Quay as the front door from the sea for Antigua and Barbuda.

He said the foul odour coming from the area, reportedly from a damaged sewage system which has been repaired, will always be the first impression of Antigua and Barbuda left with those person’s coming to our shores during this three-week period.

Stuart noted that more care needs to paid to the area and dialogue with the stakeholders to prevent this situation from recurring.

Speaking of the relocation of the vendors, Stuart was very critical of the manner in which it was done.

He said following a meeting that was called early last week, the displaced vendors were not informed that they would be moved until Friday, at which time they were told the move would be done by the next day.

Stuart said St John’s Development Corporation acted in an insensitive and uncaring manner. According to him, the vendors were relocated without any plan and thought.

Stuart lamented that they were placed at a location that is “unkempt, unclean and unsanitary”.