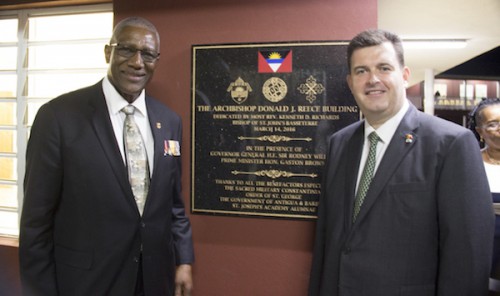 Statement by the Delegate for the Caribbean of the Sacred Military Constantinian Order of St George, Mr Anthony Bailey, OBE, GCSS.

Having been involved with Antigua and Barbuda and the wider Caribbean since the late 1980’s, I am proud of the Constantinian Order’s longstanding and ongoing charitable and inter-faith outreach across the Caribbean region in the areas of education, community outreach and the restoration of Catholic and Anglican places of worship.

It is unfortunate that this important goodwill and interfaith engagement has been damaged by a farcical and Machiavellian side show akin to an Ealing comedy.  The strong political overtones to this dirty campaign which are well documented and the internal chivalric war led by some highly questionable and unchristian individuals is regrettable.  It only serves to negatively impact on the importance the Constantinian Order and its Caribbean delegation places on raising international awareness of the plight of those less fortunate in society and in a region that is too often overlooked due to the predominance of its picture postcard paradise image.

In referring the matter to the Order’s Grand Magistry in Rome and to our legal advisers, the Delegation for the Caribbean notes that the Antiguan Government on advice of Prime Minister Gaston Browne has annulled the institutional awards granted on the occasion of the Official Visit to the island of the Order’s Prince and Grand Master and the Cardinal Grand Prior in November 2014 which took place at the invitation and sole initiative of Prime Minister Browne and his government.
We welcome the assurance of the Governor General that such a decision was due to an administrative and legal error on the part of the Antiguan Government and should not be considered a reflection on the esteem or status of any of the eight recipients.
Good actions far outweigh the privilege of any honour and this sentiment is at the heart of our voluntary work and is an essential pillar of what our internationally recognised Order of Knighthood stands for.
My love for Antigua and Barbuda and its people is as strong today as ever before.