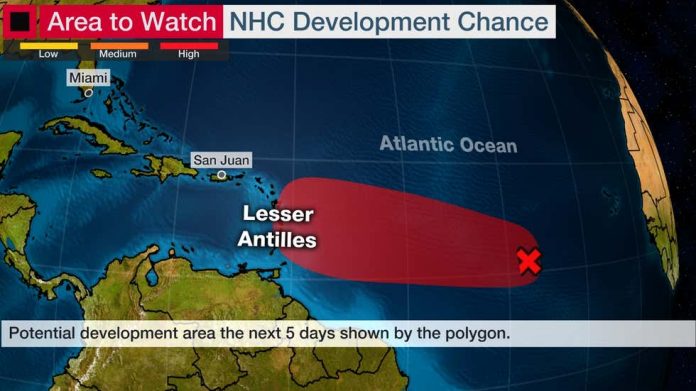 The Atlantic could have yet another tropical depression or storm develop this week, piling on to the busy start we’ve already seen this hurricane season.

This latest disturbance is a broad area of low pressure located about halfway between Africa and the Lesser Antilles. The system has been dubbed Invest 92L – a naming convention used to identify areas being watched for tropical development – by the National Hurricane Center (NHC).

Invest 92L will be steered westward the next several days by the clockwise flow around a high-pressure system centered to its north.

Shower and thunderstorm activity in this system is disorganized, but conditions along its future path should be favorable for development. The NHC says there is a high chance of Invest 92L forming into a tropical depression during the next five days.

If this system were to become the next Atlantic tropical storm, it would be named Isaias (ees-ah-EE-ahs).

Regardless of development, this system could be located near or north of the Lesser Antilles as soon as Wednesday, and then Puerto Rico and Hispaniola late in the week. It’s too soon to determine what, if any, impacts these areas might see since that will depend on the system’s exact future track and intensity.

The forecast for this system beyond the Caribbean is also uncertain. Therefore, it’s too early to determine whether it could impact any other land areas, including the United States.