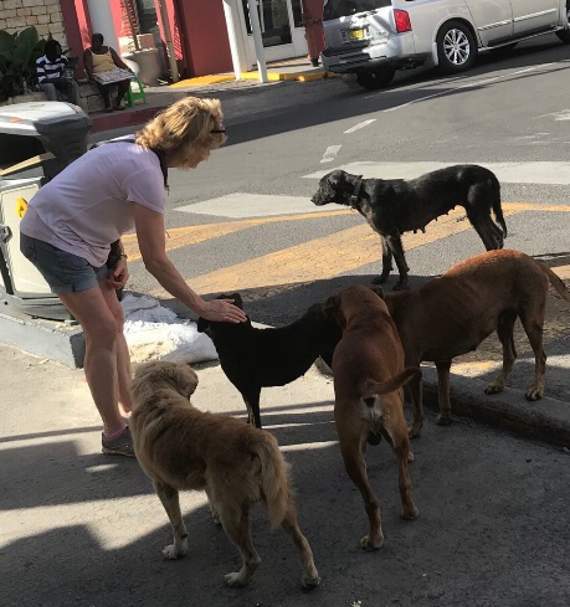 Nestled away in a sleepy Carmarthenshire village is an animal rescue centre primarily for dogs, that few people will have heard of.

With a relatively small team of dedicated staff, Many Tears Animal Rescue has become one of the leading – and certainly one of the most unusual – dog rescue organisations in the UK.

At the time of writing, the centre in Cefneithin has taken on 113 dogs in the past 48 hours; all collected from breeders who no longer have a need for them or had puppies for sale

While this amount may seem immense, it is not unusual for the organisation which takes in and rehomes over 3,000 mostly ex-breeding dogs each year.

As the vans arrive at the centre with the dogs, the priority is to make them comfortable. Sadly, a lot will need veterinary care. Many will never have experienced human affection before.

They are firstly placed in warm kennels where they can snuggle into clean bedding, meet their new kennel friends and enjoy a good meal.

To Syliva Van Atta, founder of Many Tears Animal Rescue, for the dogs she saves, this is the first day of the rest of their lives.

As a child Sylvia always felt an immense empathy towards animals. As she got older she knew her vocation was to make a difference and help reduce their pain and suffering where she could.

She founded two animal rescue centres in the UK, helped build another in Israel and then moved to the USA with her husband Bill, again to work with rescue centres.

It was here where her experience with working with dogs that were too often euthanised – many of which she describes as being done in an inhumane way – that set her and Bill on a path that eventually led to the creation of Many Tears.

Despite dogs often arriving at Many Tears with ailments, sometimes considerable, including heart conditions or requiring general surgery, Sylvia says every dog will be given an equal chance of living a good life with the love and comfort they deserve.

With so much going on daily at the centre and admitting that she is possibly a bit of a control freak, she and Bill have gone without holidays for the past 17 years.

It was a huge shock to the staff therefore, when she announced just a few weeks ago that the couple were going to take a one-week break in Antigua.

It was less of a shock when she called the office from Antigua to say that they were talking to a local vet there about helping the thousands of homeless dogs that roamed the island.

Before three days of her holiday had passed, Sylvia had immersed herself among the four small teams of locals who help the many starving and injured dogs and cats.

It was clear that ’these angels’, as she calls them, needed funds if they were going to continue to make a difference.

As she watched the huge cruise ships pull into the docks to let holiday-makers off, she watched as they avoided two dead street dogs that lay nearby in the road.

Her team back in the UK is already on standby as Sylvia informs them that she’s taken on ‘Project Antigua’, as well as adopted two dogs who will eventually join her back in Cefneithin.

As staff at Many Tears run frantically around to take the 113 dogs to their new temporary homes, the vet prepares for the many hours ahead checking the health of the new arrivals.

In addition to putting locally knitted jumpers on some of the more fragile dogs, Sylvia is arranging a collection of much-needed supplies for her new friends in Antigua.

After contacting many shipping companies, Geest Line, a cargo service based in Fareham, kindly offered to both provide and transport a container of much-needed supplies, at no cost, back to the island from the UK.

“Her need to help dogs is her purpose for living,” one volunteer said.

In addition to her daily duties at the rescue centre, Sylvia is urging anyone who can help her fill the container with supplies before it leaves in the middle of February to get in touch.

“All the Caribbean islands appear to have a problem with strays,” she said, “but these amazing small teams of people in Antigua are working hard to spay and neuter the street dogs and cats there and educate people.”

She said she hopes the island will set a precedent to the others.

For anyone looking to help the cause, a list of supplies is available on the Dogs Looking for Homes page on the Many Tears website. There, you can also donate to the cause.

The list is divided into three groups and includes items that can be used as part of an education programme in schools. Other supplies include veterinary swabs, slip leads and dog collars

There is also a link if you would like to make a financial donation.

“We appreciate every donation no matter how small,” she said.

You can visit the Many Tears Animal Rescue website at www.manytearsrescue.org