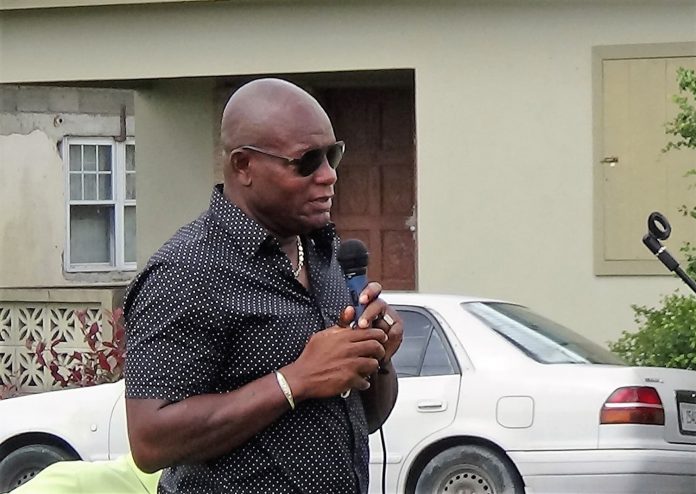 It was their old stomping ground which spawned them to greatness. They haven’t gotten.

So on Monday, they returned to inspire, hopefully, another generation of top players from their community.

Sir Curtly Ambrose and Ridley Jacobs, whose names are among a Who’s Who in West Indies cricket, graced the start of the Rufus Lewis Revival Cricket Camp, ogranised by charitable group, the Helping Hand Foundation, at the Swetes Playing.

“I was born, raised and grew up in this village,” the giant lank fast bowler told the proceeding broadcast live on local radio and via Facebook video. “Just behind the school is where I was born. So I’m a true Swetes man.”

“When you look at this field here, this is where I honed my skills. I didn’t become a great cricket overnight. I had to come here (playing field) every day, every afternoon to hone my skills and then I move forward.

“So I want to say to you young aspiring cricketers there’s no short cut to progress. No short cut. If you want to be the best you can be you have to train your mind and prepare yourself to work hard. There’s no shortcut to success. At the end of the day, you will repeat the rewards and be successful,” said Sir Curtly.

He played 98 Test matches for the West Indies and has been widely acknowledged as one of the greatest fast bowlers of all time He took 405 Test wickets at an average of 20.99 and topped the ICC Player Rankings for much of his career to be rated the best bowler in the world.

Jacobs, who donned the gloves for the Windies between 1998-2004, spoke candidly of damaging the house of Rufus Lewis, the man whose name adorns the camp, who lives a stone-throw away from the field on the western side. You could imagine the left-hander hooking and pulling deliveries from the northern batting cease into Mr Lewis’ windows.

“I must say sorry for all the glass we break.  I must apologise for all the hardships we put you through. In spite of all that you still come and support,” Jacobs said of Rufus Lewis.

The ex-Windies also spoke glowingly of Sir Curtly’s late mom, Hilly Ambrose, who passed a few years ago, who famously rang her bell whenever her son would take a test wicket.

“Those are the kind of people we are looking for to revive cricket back in Swetes.

“I’m very proud to be born here in Swetes and played most of my cricket here. I must recognise some of the past players and even some (people) who paved the way like (the late) Vaulton Mack (who was laid to rest on Monday) who was tremendous to us young players over the years in providing gears and equipment that was needed.

Mack, whose widow is retired outstanding principal and teacher, Vernis Mack, was a leading manager and organiser of the Swetes Cricket Club.

Under the guidance of head instructor Abdiel Hughes, certified coach with English experience, the participants were taught the rudiments of how to bat on the first day at the Swetes Playing Field.

Organised by the Helping Hand Foundation, a community-based charitable organisation, a selection of ex-Test and first-class players graced the Opening Ceremony which was aired on the popular Good Morning Jo Jo Show on NewsCo OBSERVER Radio as well as live video feed on the Antigua Commercial Bank Facebook page.

The camp concludes on Friday when all the players, as well as the top participants, will be recognised at the Closing Ceremony.