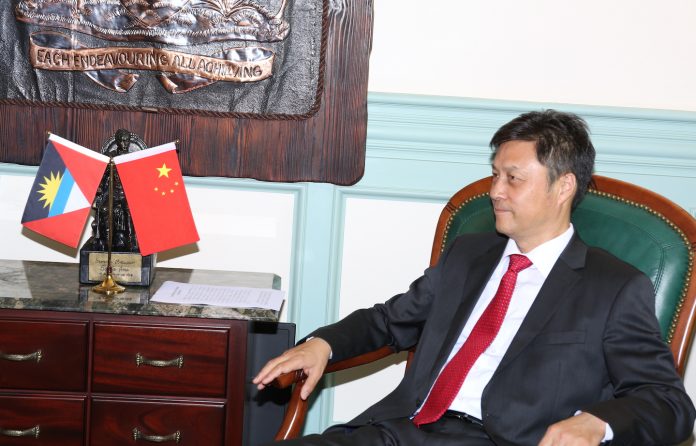 “Goods in China are still relatively cheap and we want to see how we can ship goods directly to Antigua and Barbuda. In that way, they will not be affected by the tariffs. The work ongoing at the ports is a direct benefit to this idea because ships carrying goods from China will be able to dock,” he said.

The United States placed a 15 percent tariff on about $112 billion of Chinese imports, resulting in more than two-thirds of consumer goods imported from China have been subject to tariffs.

“We firmly oppose such tariffs and we are negotiating with the United States at a high level. Any increase will naturally affect this country. We want to see the issue resolved,” said Ambassador Sun.

He suggested that utilizing e-commerce as another option to prevent the backlash from the US tariffs could be effective.

“When we look at sites like ALIBABA, it’s a worldwide company that can be used to purchase products that would not include direct tariffs. We need to make good use of e-commerce,” Ambassador Sun added.

In 2018, President Donald Trump began setting tariffs and other trade barriers on China with the goal of forcing it to make changes to what the US says are “unfair trade practices”. Among those trade practices and their effects are the growing trade deficit, the theft of intellectual property, and the forced transfer of American technology to China.

In the United States, the trade war has translated into difficulties for farmers and manufacturers, and higher prices for consumers. In other countries, it has also caused economic fallout, though some countries have benefited from increased manufacturing to fill the gap. It has also led to stock market instability. The governments of several countries, including China and the United States, have taken steps to address some of the damage. The trade war has been criticised internationally; in the US, businesses and agricultural organisations have also been critical, though most farmers continued to support Trump. Among US politicians the response has been mixed.

The trade war has caused a significant deterioration in China–United States relations as the countries exchanged tit-for-tat tariffs for over a year, with Trump threatening more to come and no resolution in sight.