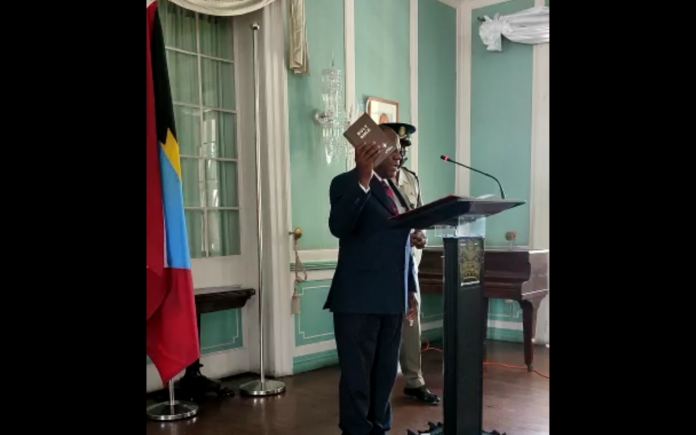 The vacant spot on the Antigua and Barbuda Electoral Commission (ABEC) has been filled.

Mr. Alrick Daniel was officially sworn as a Member of the Electoral Commission during a brief ceremony at Government House on Thursday.

Daniel fills the seat as a result of the appointment of Mr. John Jarvis, as Chairman of the Electoral Commission, last month. The new member received his instrument of appointment from His Excellency the Governor General Sir Rodney Williams.

“Your responsibility is to ensure that the confidence of the people in the democratic system is solid. We do hope that you would use your experience well, that you would use your knowledge well and follow the laws of the electoral process clearly, and wherever those laws may appear vague, that you will use your discretion and seek clarity and counsel where it may be obtained”, said Sir Rodney.

Daniel is no stranger to the role, having served as a Member of the Commission from August 2014- July 2015.

“I am very honoured to be selected to serve on a body that represents the advancement of democracy in Antigua and Barbuda. The Commission has a major role to play in maintaining a transparent electoral process in the country and I am pleased that I will be a part of that process”, Daniel expressed.

Mr. Daniel is a professional with twenty (20) years of experience in the field of Labour Relations. He worked with the Antigua & Barbuda Trades and Labour Union for fourteen (14) years where he served as Industrial Relations Officer, Deputy General Secretary and General Secretary a position which he held from 2009-2015 and February 2022 to present.

Mr. Daniel also worked as a Labour Relations / Human Resource Management Consultant and with the International Domestic Workers Federation based in Hong Kong, as the Regional Coordinator for the Caribbean.

During his career he has partnered and worked along with various International Agencies on a number of initiatives including but not limited to Programme for Management Labour Cooperation (PROMALCO), Trafficking-in-Person and HIV/AIDS Workplace policy.