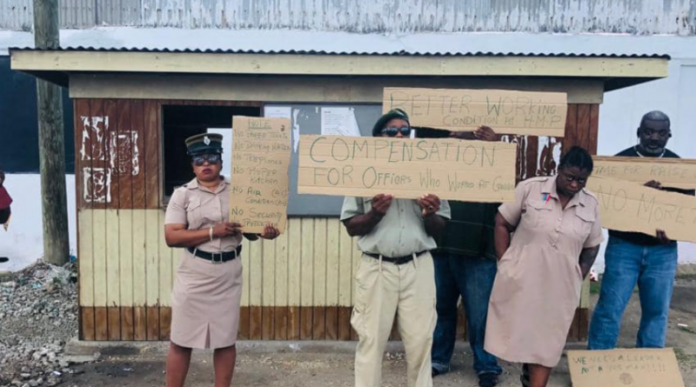 POINTE XPRESS: As correction officers continued their protests at His Majesty’s Prison for a second day, Minister of Public Safety, Steadroy Benjamin, said work is being done at the detention facility to address the concerns of the officers.

While he admitted that the work may not be progressing at the speed the officers may wish, Minister Benjamin said on Tuesday that his ministry is collaborating with other government agencies to improve working conditions at the prison.

And while he did not minimise the legitimacy of the officers’ concerns, he expressed his belief that their disgruntlement was really rooted in the recent security changes at the prison.

“There are conditions which need to be addressed and are being addressed at the moment. Maybe they are not being as readily as they should, but you’ve got to work along with the Public Works Department and the Ministry of Health, and those issues are being addressed, but I dare say, I have been informed, and I do well believe, that all this matter springs from what’s taking place with respect to security within the prison walls,” said Benjamin.

He continued while the construction of a new prison facility would be an ideal resolution to the concerns over infrastructure at the prison, this is not possible at this time, therefore, the government will continue to make strategically implemented improvements.

“We can’t build a new prison at this particular point in time; the world economy makes that a problem. So, what we’re doing is to fix what we have as best as we can to make certain that we meet the minimum standards of the international regulations and stipulations for prisons,” Benjamin continued.

Meanwhile, the prison officers have said that they intend to continue their protest until a commitment is given to resolve their issues.

They are also now demanding an audience with Prime Minister Gaston Browne in which they can air their grievances.

Their list of concerns includes receiving a promised raise in pay, an immediate improvement in the overall cleanliness of the institution, including its bathroom facilities. They also have complained about how senior members of the prison’s hierarchy treat them.

There also seem to be tensions between the prison officers and the police who have been called in to beef up security at the institution after an alarming increase in contraband items.

The prison officers have accused the police of being rude and difficult to work with.

In recent months, items including mobile phones, drugs, and other illegal items have been found in the possession of inmates and some corrections officers who were discovered smuggling the contraband into the 287-year-old prison.