In celebration of the Nation’s 39th Anniversary of Independence, the Antigua and Barbuda Festivals Commission (ABFC) is pleased to announce its Independence social media takeover campaign, #MyAntiguaBarbuda on Friday 30th October.

Due to the COVID-19 pandemic, which resulted in a scaled down Independence Anniversary calendar, the ABFC made the decision to keep the Independence spirit alive by utilizing social media. With the advent of technology and its extensive reach, the use of social media not only facilitates online engagement amongst our residents, citizens and the diaspora, but also allows the world to experience the uniqueness, and true meaning, of the Antiguan and Barbudan Independence.

The campaign, which is primarily geared towards showing National pride, also seeks to showcase the strength and resilience of our people during this COVID-19 period. It further helps to merge our Antiguan and Barbuda traditions and norms with a modern-day digital experience.

On October 30th, which is also National Dress Day, the ABFC is encouraging all residents and citizens to participate in the online social media takeover by using the unique hashtag #MyAntiguaBarbuda in all posts on this day. This includes all social media posts relating to National Dress Day, local cuisine, music, historical sites, beaches, the National Flag, and other National symbols/facts commemorating our Independence.

In addition to the typical National Dress Day activities, the ABFC will feature businesses, groups/organizations, and individuals online via the Antigua and Barbuda Festivals Commission Facebook page, and its Instagram page @antiguafestivals. To be featured, images must be submitted via email to, [email protected]

This year, to continue the efforts of reaching wider audiences online, the ABFC has placed a strong emphasis on broadcasting the Independence events live on television and radio or shown virtually across social media. This includes the Heroes Day Wreath Laying Ceremony to honour our Nation’s Heroes, and the Virtual National Solo Dance Competition on Monday 26th October; the inaugural Independence Virtual Calypso Monarch featuring ten calypso finalists on Saturday 31st October; the Independence Ceremonial Parade, with its new time of 5:30 p.m. on Sunday 1st November; and the Barbuda Independence Parade on Monday 2nd November at 8:30 a.m.

The ABFC is hopeful that while we celebrate our Nation’s 39th Independence Anniversary, under the theme “One Purpose, One Vision, One Nation”, we will be able to showcase the celebrations to a wider cross-section of residents and citizens, locally and abroad, through an elevated social media approach – #MyAntiguaBarbuda. 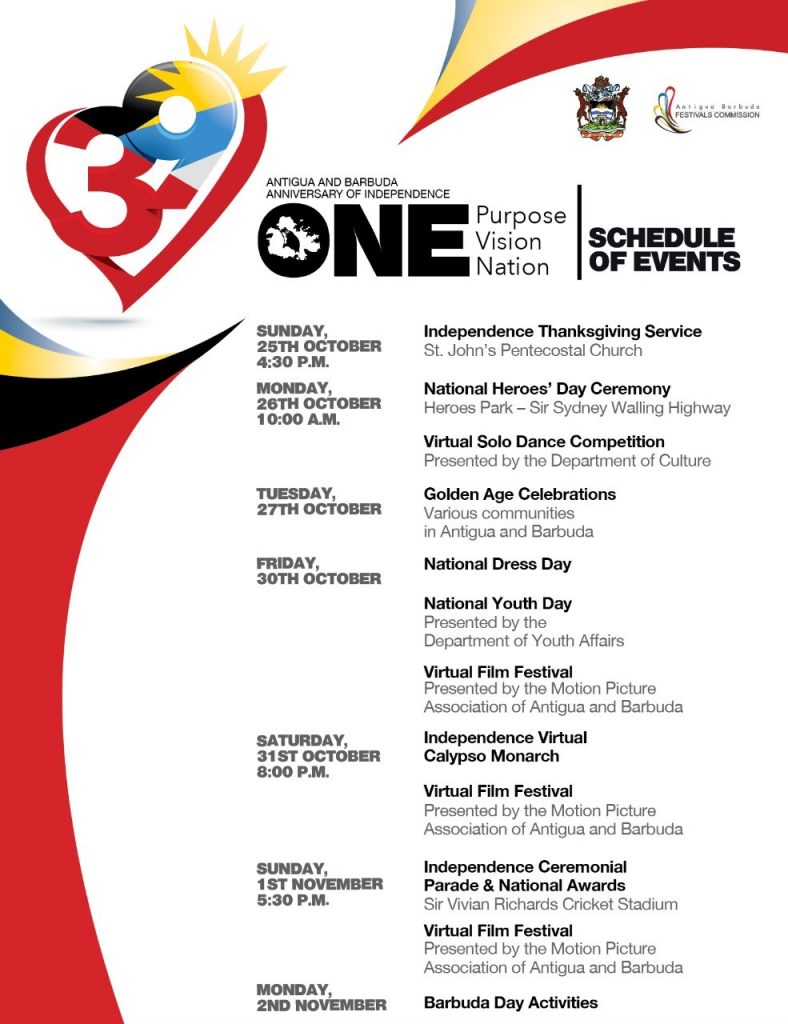