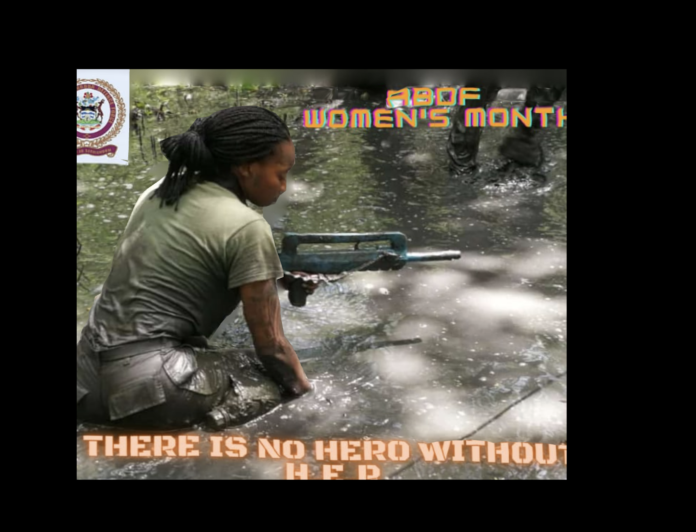 This country will truly never get better if those who are hired to protect and serve aren’t held accountable for their actions.

I was nothing short of surprised when I saw a post on the ABDF Facebook page saying, “We thy sons and DAUGHTERS stand ready to serve!!” The 3D image includes the text, “ABDF Women’s Month” and “There’s no hero without her.” Would you believe that the woman chosen to represent those words while holding a gun is Aliyah Martin?

The woman who has a murder charge before the courts for the heinous and unjustifiable murder of Bruce Greenaway? I know the ABDF is a male- dominated arena but is that the best woman that the defence force could find? Even if there are only 12 women in the army, I could only hope that the other 11 have a better reputation than this young lady.

I remember being at the defence force base some time ago and the said young lady saw young recruits and said those being trained were, “too soft.” Given her charge, she should not pass a word on anyone but she was walking around happy go lucky.

I am sure there are some who would argue that the case hasn’t been tried yet and as the dotish black people we tend to be, we would like to throw out the most misused words among us, “Don’t judge.”

However, everything that guards our lives has to do with judgment. The point however is that we have a society where people can be accused of the most disgusting crimes and not only continue to live ordinary lives but be celebrated.

The word “hero” is being associated with this young lady in the ABDF’s post. This is a gross disrespect not only to the family of Bruce Greenaway but to other law- abiding, well- thinking individuals who believe even Caesar’s wife should be above reproach. When we have a society that constantly looks the other way at wrong and try to downplay wrong, we wind up with a society that has lost its moral consciousness.

A country where a man who at one time served time for murder can practice law and think that he is who the country needs to serve in one of the nation’s highest positions as a Member of Parliament.

We wind up with pedophiles… convicted pedophiles who think they are in a position to be the moral barometer of the country. We wind up with a person involved in a passport scandal giving legal advice to our government and corruption abounds.

People do not think that there are true consequences for their horrid actions because not only are they not shamed, they are welcomed into the fold and establishments such as the ABD provide a covering for their ill- doing and numb any degree of guilt these people ought to feel.

I was listening to the Snake Pit one night and Dane Knight chided people who had an issue with Sherfield Bowen’s candidacy and asked what was Michael Browne charged for? We are in a race to the bottom and it is nothing short of a shame. While those with twisted minds may say, none of us are perfect and who are we to judge, I would dare say there are many Antiguans and Barbudans who have managed to live their lives within the ambit of the law and are repulsed at the lawless and callous society we have become.

We can say many things that we like about America but many of us would have our goose cooked if we lived in the US. As soon as your name is called in wrongdoing and causes disrepute to an organization, your job would be on the line. It’s about time we begin implementing policies to put pressure on those embroiled in wrong which damage the morale of institutions.

I would not feel good to be in the police force or defence force along with alleged murderers who continue to live their best lives and be praised. It cannot be good for the culture of an organization.  We need to do better from our politicians come right down.

The police force and defence force need to be cleaned out and no longer a hub for lazy, young people who could not fare well academically. Let’s do better Antigua and Barbuda.