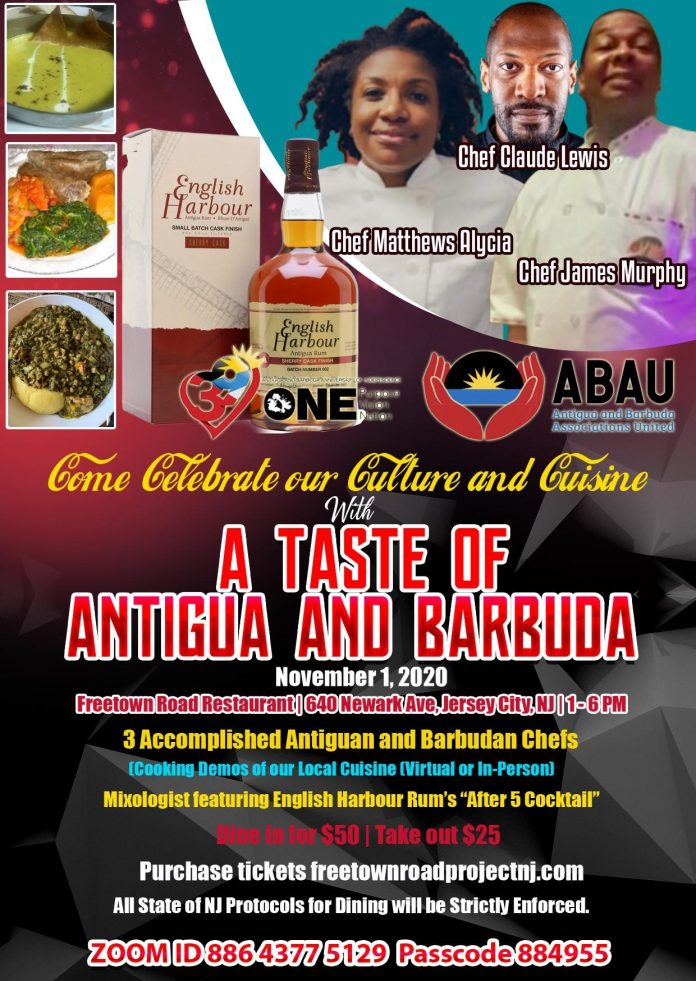 New York, NY – Antiguan and Barbudan nationals in the diaspora are in for an exciting culinary adventure on Independence Day, November 1, 2020.  The appetizing cuisine, flavorful rums and unique cultural traditions of the twin-island nation will be proudly presented at the novel “A Taste of Antigua and Barbuda” event.

Chef Claude Lewis, Food Network winner of the popular show “Chopped,” will partner with Chef Alycia Matthews, a finalist on Rachael Ray’s “Tuition Competition” and Chef James Murphy, Caribbean Culinary Ambassador.  The event will be staged at Lewis’ Caribbean-style restaurant, Freetown Road Project, 640 Newark Ave, Jersey City, NJ from 1 – 6 PM.  The venue will be transformed into a virtual culinary theatre and this trio will showcase some of Antigua and Barbuda’s culinary delights and conduct 30-minute live demonstrations of local dishes.

Born and raised in Jersey City to Antiguan and Barbudan parents, Lewis’ restaurant celebrates his heritage. His father who hails from the village of Freetown and his mother who is from the village Old Road, met while working at the legendary Half Moon Bay Hotel.  Lewis grew up in a melting pot of cultures in Jersey City, the second largest city in the state of New Jersey and home to many Caribbean immigrants.

Antigua and Barbuda established a Sister City Agreement on November 1, 2002 at the Antigua Recreation Grounds. The agreement was signed by former Prime Minister Sir Lester Bird and Former Mayor of Jersey City, the late Glenn D. Cunningham.  Chef Lewis wants to help reactivate the relationship between these two cities. He will use his restaurant as a bridge to strengthen the cultural connection between the two cities that have helped to shape his values and identity.

One of the highlights of the “Taste of Antigua and Barbuda” event will be a mixologist who will treat adult patrons to a rum tasting of English Harbour Rum’s new Global cocktail called “After 5.”  This signature drink that is a modern variation of the Old-Fashioned Rum Punch with an Antiguan twist, will be served in an iconic wooden barrel mug, similar to the barrels used in the aging process of local rums. This cocktail is currently being featured as part of a series of local weekly bar and restaurant hops, as a precursor to the 2020/2021 Hospitality Season. ‘After 5’ will be officially rolled out internationally across the USA, Canada, Europe in November.

“I grew up in a home where Antiguan and Barbudan food, rum and culture were always proudly embraced as a part of my family’s heritage. To be able to connect fellow chefs, English Harbour Rum, the Antigua and Barbuda Associations United and to bring all of this to Jersey City in an event like this, is a dream come through. It has been my vision to connect Jersey City and the Caribbean through our delicious cuisine,” said Chef Lewis.

Donyelle Bird-Browne, Senior Business Development Manager, USA for the Antigua and Barbuda Tourism Authority (ABTA) commented, “I am proud to see that this partnership between these two communities that was signed almost 20 years ago, after the 9/11 attacks, still has the potential to bear fruit. The US, and the NY Tri-state area in particular, continues to be our primary source market for visitors and returning nationals and I hope that this initiative can help to strengthen Diaspora relations and ultimately drive more traffic to our destination.”

This year many nationals in the Diaspora will miss the patriotic gatherings because of the global pandemic and this “hybrid event” will help mark the nation’s 39th anniversary of Independence.  It will address both virtual and live audiences, by leveraging digital communications technology in a limited dining setting.  Patrons can dine in for $50 and enjoy cooking demonstrations. For those who choose to dine out the cost is $25.   Cooking and mixology demonstrations will be live-streamed via Zoom.  Information on tickets, Independence menu, cooking schedule and log-in information is available on www.freetownroadprojectnj.com.  All ticket purchases include a premium Antigua and Barbuda Associations United (ABAU) Independence T-Shirt.  Strict physical distancing and all NJ protocols for dining will be strictly enforced.

The event is supported by the Jersey City Mayor’s Office and the Antigua and Barbuda Associations United, an umbrella group representing 25 Antiguan and Barbudan community organizations throughout the U.S.