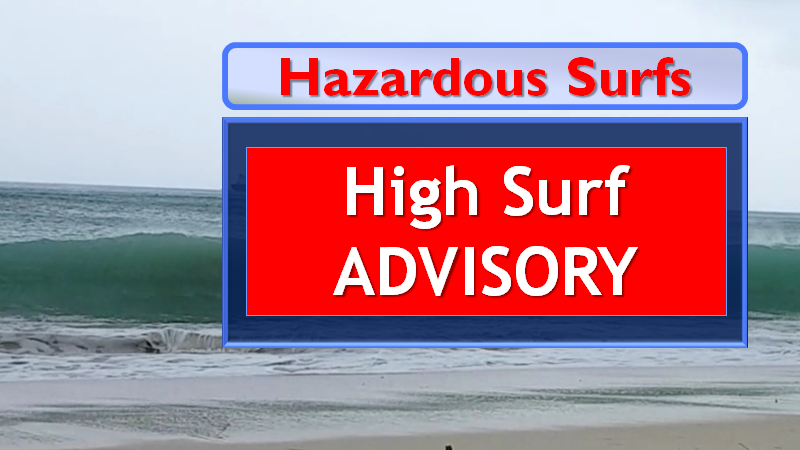 A high surf advisory is in effect for Antigua and Barbuda, the rest of the Leeward Islands and the British Virgin Islands. A high surf warning is likely for tomorrow. Long northerly swells of moderate height are imminent or already reaching the islands.

These conditions will be conducive for dangerous rip currents. Please note that surfs could be as much as twice the height of swells. Coastal flooding: High tides combine with onshore wind and swell actions will result in localized coastal flooding and beach erosion. Locations (to be) affected: Exposed and shallow northwest, north and northeast facing coastlines. Timing: Until Saturday. Impacts (possible/likely/expected): Loss of life – strong currents that can carry even the strongest swimmers out to sea; injuries to beachgoers; beach erosion; sea water splashing onto low lying coastal roads; beach closures; localized disruptions to marine recreation and businesses; financial losses; damage to coral reefs; intrusion and disruptions to potable water from desalination.

High surfs can knock spectators off exposed rocks and jetties. Breaking waves may occasionally impact making navigating the channel dangerous. Precautionary/preparedness actions: A high surf advisory means that dangerous surfs of 2 to 3 or 6 to 10 feet will affect coastlines in the advisory area, producing hazardous conditions. Beachgoers should be extremely cautious; bathe only where lifeguards are present or the sheltered, less affected southern beaches.

Rip currents are powerful channels of water flowing quickly away from shore, which occur most often at low spots or breaks in the sandbar and near structures such as groins, jetties piers. If caught in a rip current, relax and float. Don`t swim against the current. If able, swim in a direction following the shoreline. If unable to escape, face the shore and call or wave for help. Stay tuned for further updates. Forecaster: Dale Destin

A major swell event is forecast to impact much of the Caribbean this week. Swells are likely to exceed 2.5 (8 ft) and occasionally exceeding 3 (10 ft), coming out of the north. These swells will result in dangerous surfs for beachgoers; hence, advisories and or warnings will be required.

The swell event will be generated by gale-force/storm-force winds, from a powerful low-pressure system, making its way across the northern North Atlantic. This is the same system that dumped an obscene amount of snow – over 660 mm (26 in) across parts the United States.  Obviously, none of this weather will reach the Caribbean but the sea swells will.

The swells in and of themselves are not the real concern. The greater concern is the large breaking swells or high surfs that these swells will caused when they reach the shorelines across the region. Such long period swells can result in surfs as high as twice their heights i.e. up to 6 metres (20 ft).

The eventual height of the surfs is largely dependent on the bathymetry (shape and depth) of the near shore coastal areas they interact with. Generally, the shallower the near shore areas, the higher the surfs. The greatest impact will be on the north-facing beaches and coastlines.

The event has started across the Bahamas and will reach the western Caribbean by tomorrow – Tuesday. It will then spread to the Eastern Caribbean Wednesday, including Antigua and Barbuda, and the southern Caribbean on Thursday. Moderate swells and associated high surfs are also forecast to reach the coastline of northeast South America, including the Guyanas on Friday.

These high surfs will have the potential impact of injuries or loss of life, beach closures and financial losses. Impacts could also include:

These swells and surfs could result in strong rip currents that can carry even the strongest swimmers out to sea. Rip currents are powerful channels of water flowing quickly away from shore, which occur most often at low spots or breaks in the sandbar and near structures such as groins, jetties and piers.

If caught in a rip current, relax and float. Don`t swim against the current. If able, swim in a direction following the shoreline. If unable to escape, face the shore and call or wave for help.

There is also concern for those who visit non-beach coastal areas. High surfs can knock spectators off exposed rocks and jetties. Those who rock fish need to pay attention and not expose themselves to this hazard. Breaking waves may occasionally impact harbours making navigating the harbour channel dangerous.

With this event happening near a full supermoon, high tides will be higher than usual; hence, coastal flooding and erosion are more likely than usual. Coastal flooding from the sea is largely depended on high tides, onshore wind and swell actions.

The potential impacts listed above are just that – potential/possible impacts. I am not saying that they will all definitely happen, but conditions could result in such and past similar swell events have caused such.

If an high advisory is issued for an area – be extremely cautious; bathe only where lifeguards are present. If a high surf warning is issued – do not enter the water. Relatively safe conditions are likely on the opposite or southern sides of the islands.

Swells and associated surfs will peak across the Bahamas on Wednesday; the Eastern Caribbean on Thursday; the southern Caribbean Friday and northeast South America on Saturday.

In addition, to concerns for those using the beaches and coastlines, there are concerns for mariners of the northern islands, as expected strong winds will, among other things, cause hazardous seas. For more, see my blog – Strong Winds and Hazardous Seas to Impact Parts of the Caribbean, coming out tomorrow.