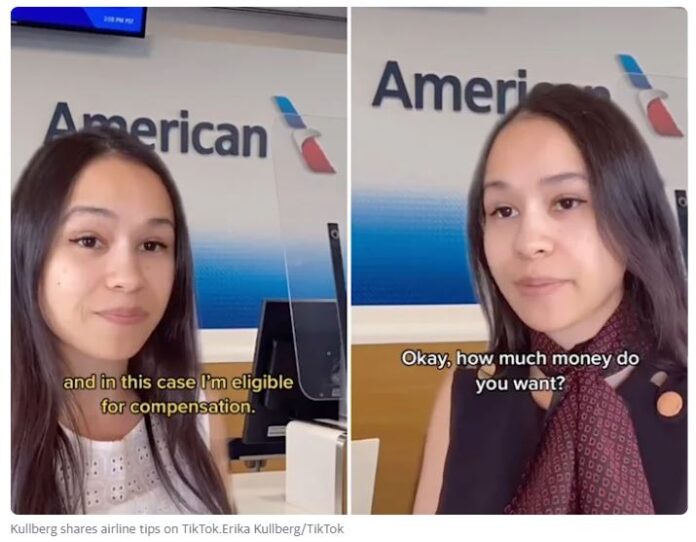 TikToker and lawyer Erika Kullberg has racked up millions of views on a video that explains how you can get money from airlines if they bump you from a flight.

In the video from December, Kullberg, who had 7 million followers at the time of writing, acts out a conversation between an airline employee and a customer who’s bumped from a flight. In the end, the customer receives $1,000 for having to deal with the delay by citing the policy known as “involuntary denied boarding.”

At the time of writing, the video had 36 million views and almost 6 million likes, and people in the comments said Kullberg’s tips worked.

“Erika, I just used this tip at the airport coming back home from Virginia. I’ve literally got enough money to pay for another trip. Thank you,” one TikToker commented.

“Currently working as a gate agent and all of this is true. Always ask,” wrote another.

Kullberg begins the video by establishing that the customer has been bumped from the flight, and the airline attendant says there’s not much they can do.

“Actually, I’ve read the terms. This is called involuntary denied boarding. And in this case, I’m eligible for compensation,” Kullberg says to the attendant.

Since the one-way fare cost $250 and the next flight available was in three hours, Kullberg said that according to the Department of Transportation, she was eligible for $1,000 in compensation, citing that you can get 400% of the cost of your one-way fare if your flight is delayed more than two hours, and airlines can limit compensation if it’s higher than $1,550.

For a delay between one and two hours, you’re eligible to receive 200% of the cost of your one-way fare, and airlines can limit compensation if it’s higher than $775, according to the Department of Transportation.

Kullberg is a founder and lawyer at Plug and Law, a firm that specializes in trademark registration and legal agreements. She also shares her legal tips with her 2.4 million Instagram followers. She told Insider she likes to use her law degree to help people by simplifying complex information that’s often written in a way that’s hard to read on purpose.